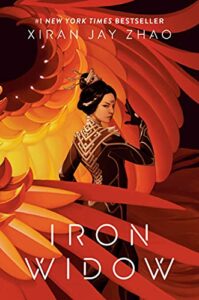 Iron Widow by Xiran Jay Zhao was one of the 2021 Cybils finalists for YA Speculative Fiction, and it was intriguingly different from the other contenders–but I also had a few mixed feelings about it, even though it was clearly popular with teen readers (judging from the many library holds we all experienced with this title). I found myself going back and forth between being totally absorbed and feeling distant from the story, but I’m just one reader, and your mileage may vary!

In any case, Iron Widow was a very cool, very pop-culture-savvy blend of sci-fi mecha elements and terrifically vivid world-building. Protagonist Zetian lives in a culture clearly influenced by historical China, but one in which women are still wholly oppressed and treated as objects, as tools. Girls’ feet are bound, and their destiny is grim–marriage, childbearing, essentially lifelong servitude to their husband and family. The “lucky” ones who exhibit the right kind of potential might become a concubine-pilot–bound to a male pilot who siphons her energy in order to power a giant animal robot, used to defend their land of Huaxia from the mecha aliens outside the wall.

When Zetian’s older sister becomes a concubine-pilot and is killed, Zetian is determined to become one herself–and kill the boy responsible for her sister’s death. In the process, she discovers just how powerful she really is–and how deeply rooted are the secrets and corruption of their misogynist society.

Zetian’s singleminded pursuit of vengeance was kind of an unrealistic fantasy to me in certain ways, but at the same time, I do know some readers will enjoy that aspect of the story. For me, there were a few issues with the pacing, though; I found myself wanting some parts sped up and others slowed down to explore in more depth. Similarly, the characterization could have been developed more in places, e.g. with her family, who essentially were just there to give her a horrible background to escape from and didn’t seem to have any redeeming qualities. It’s a classic sort of setup for the “escape from awful circumstances” plotline, though, and is sure to satisfy readers raised on anime and manga sci-fi genres who are looking for an absorbing, action-packed adventure.