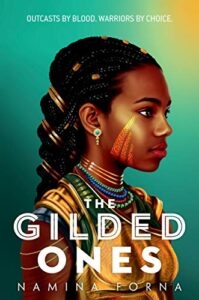 At sixteen, Deka is ready to be initiated into the adult world of her village in a blood ceremony–a ritual in which girls are tested to make sure their blood runs red. If it runs gold, they are deemed impure and cast out. Deka, whose mother came from a faraway place, is different from the other girls, so she’s eager to prove her worthiness in front of them. But instead, she bleeds gold, and is punished for it…until a mysterious stranger comes to town and offers her a bargain: she can stay in her village, where she’s already shunned even by her own family, or she can join the emperor’s army of alaki–girls who, like Deka, bleed gold–and be trained as a warrior.

That’s where her journey really starts, as Deka begins to discover who she really is and what it means to be an alaki, conscripted to fight the ongoing scourge of deathshrieks attacking and killing throughout the empire. I thought this one had a really cool premise—the world the author created is rich with potential, and there was plenty of adventure and surprises as the main character comes into her own. As a reader, I felt greedy and wanted a bit more detail in the world-building from time to time, but your mileage may vary on that. There are exciting twists and turns as Deka learns more about the truth of the world she lives in–which is not what it seems–and learns to balance her quest for justice with her desire for vengeance against the male-dominated status quo.

And, good news for readers: the sequel comes out at the end of May!