Since everyone goes through reading troughs and peaks I shouldn’t have really been surprised when in this, The Second Year of Our Lord Pandemic Twenty-Two, I hit a wall. Part of it was reading nonfiction for the Cybils as a finalist judge instead of a panelist and being unable to write about the books I wanted to talk about, but after that, it was just that I wasn’t reading middle grade and YA books I wanted to talk about. Since fiction hasn’t coaxed me as sweetly lately, let me tell you what else I’ve been enjoying…

Nonfiction: I love the research rabbit hole and my primary or secondary characters knowing random little bits of this and that is one of the things that I find makes fiction great. I’m picky about nonfiction, after a childhood of being forced to read it, so these are a couple of examples that stood out to me – for various reasons. 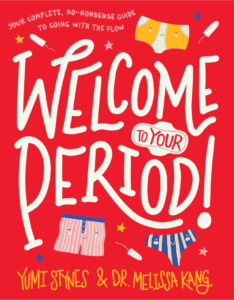 Welcome To Your Period: It consistently amazes me how many misconceptions people have about the human body. There are even a lot of women who were taught misinformation about their own reproductive systems, and pass along erroneous information to the next generation. This author figures it’s about time to stop that, and while this book was first published in the UK Commonwealth, I’m glad it was deemed worthy of reprinting in America (without even too many changes to anything but spelling, I hope). Even if you as a parent or teacher can’t get your female child to pick up this book, this was good for me to read. And since I’m writing middle grade characters for whom this is applicable, it’s good knowledge to have. 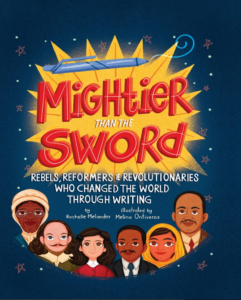 Mightier Than the Sword: Rebels, Reformers and Revolutionaries Who Changed the World Through Writing: To be honest, I didn’t think I’d like this book. The title seems… pretty weighty. It promises a lot, and I don’t read a lot of writing books which fulfill their promises very often. This… actually fulfilled its promise because it wasn’t promising to make ME a rebel, reformer or revolutionary, but to introduce me to them by means of a series of forty brief character sketches in chapters (as well as about a hundred sidebar mini-sketches) and lively, cartoon-y drawings. In this book, the reader meets people from long-ago history, people in the present, people of color and white people who landed on a cause with both hands and then freed a few fingers to take up a pen. This book is brilliant, in terms of inspiration for teachers – there are DIY writing prompts and exercises to encourage fledgling writers to write with the causes of the rebels and reformers as inspiration. It’s also on point for actual writers whose courage occasionally flags and they think there’s no point. It’s good to see who has gone before you, and upon whose shoulders you stand. The writing prompts also scale up to be usable from first grade to adult.

We don’t often think about nor talk about the power of words, but how often have you been moved to tears or laughter or resolve by something you read? The power is there – and available to every writer, if we grab it. I was startled by how amazing this book is and actually bought it, even though I read a digital copy for the Cybils. This is a hardback, brand new book from a small press and priced accordingly – but it’s wholly worth it.

The Elephants Come Home: A True Story of Seven Elephants, Two People, and One Extraordinary Friendship: Because I was reviewing for both MG and children’s nonfiction, I ran across books for a much younger audience, including this gorgeous book with wonderful illustrative spreads and a very simple storyline – some elephants were angry and bad, due to their rampaging, they were sent to live elsewhere, through the patience of the man on whose property they now lived, they became better and wandered his vast estates, and when he died, they came back, the end.

First of all, elephants are MAGICAL to human beings – we’re so here for them caring about their babies, having graveyards, and grieving their dead. We’re here for them having big brains and remembering things like us. So, most of us are prepared to overlook a great deal in a book about elephants – I was. I read this book and LOVE, love, loved it. And then I reread it. And reread it.

There are Black and white people in this book. Only the white people have names. And then I wondered, “where is the setting for this book? In Africa, yes, because elephants and the people who aren’t the property-owning man are drawn as dark brown… Hm. So, no names, and no nation of identity, or identifiable anything… The only people of importance are the “bad” elephants who were rampaging, and the white dude, who is immediately placed in the savior role, as he is the only one who knows what to do with and for the elephants who are rampaging at the Black people, and thus is the only important person in the story.

And therein was the source of the problem.

In the beginning, I said this story was simple – that’s usual for books for young readers. Their stories are simplified for their young minds, and it may seem hard to imagine adding things like the nation where the story took place or the names of secondary characters. It may seem impossible to broaden the story to include White Africans and Black Africans and the friction there exists between the two and the questionable reason only white people in this book had vast estates to offer the elephants – surely all that has nothing to do with the story. But, there are ways to make subtle acknowledgements of a people’s importance – and a person’s extraordinary privilege and luck. Not all picture books are simplistic, even if they are simple, and I found it disappointing that a picture book which could have been perfectly beautiful was imperfectly executed. The story remains magical – and true. But what also remains true is the erasure. I’m still not sure how to feel about this book – but for the adult who is ready and able to talk to their young readers, it’s a great, great story.

Thanks for reading my notables in nonfiction, stay tuned for some notable adult crossovers!