Summer-as-topic novels are surprisingly easy to find this year. This one caught me utterly by surprise – I didn’t expect a late junior high love story.

Grateful to escape the new-baby excitement at home with Aunt Janine and Uncle Mark, eighth grader Andi is still reluctant to leave the familiar behind and get on board with the music camp plans they have for her. Grieving, lost, and feeling in the way since her mother passed away and left Andi to be raised completely differently by her younger aunt, she’s nevertheless unprepared for the mostly white population at the camp, unprepared to be sort of automatically paired with the one Black girl in her cabin, and most of all, unprepared to chase her trumpet music, which has always come so, so easily to her.

(Also, she could COMPLETELY do without the KNEE SOCKS which are part of the camp uniform.) 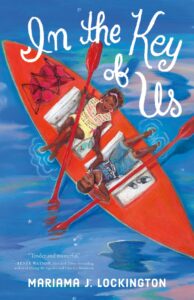 Meanwhile, on the bunk below hers, bright, smiley, sparkly Zora is a well-known and well-seasoned camper. Everybody knows her, everybody likes her, but she doesn’t seem to have much time for Andi. The truth is, everybody may like the Zora they see, but few of her fellow campers know her, and the pressure cooker in which she lives. Nobody knows that Zora would rather dance than play the flute, and that her mother and father – both professors with PhD’s – have so many goals and dreams for her, their late-age miracle baby, that she feels that she cannot keep up and there’s no hope of a breather. The only thing that brings relief is pinching, punching, and scoring her flesh with her own nails. At least, then, she can feel something other than panic.

Zora doesn’t want to be curious to know this new girl who doesn’t seem to want to know her, whose dark eyes hold her own pain and secrets. Zora certainly doesn’t need to take her eyes off her goals for the summer, things her parents want for her, things she promised to pursue. She certainly shouldn’t be signing up for dance classes, or reaching out to hold Andi’s hand in the dark.

Maybe this isn’t a “love” story, quite, but it’s a like story, the story of a beginning, of endings, and how all we can do is navigate the changes in the tune as carefully and calmly as we can, as life sings its song.