I always love ensemble stories, and this one is a great one, with each chapter told from the point of view of a different character. Many times in stories like this there’s a sense of ownership from one character over the story as a whole, but this time, it’s less obvious whose story this is — both Oscar and Noah are West Beacon residents and know its history and interests. Riley is the newcomer, but her mother was born there, and her Uncle Pete is locally known as Father Pete at St. Barbara’s Catholic Church, so Riley has roots, whether she likes it or not. These three very disparate characters – a brawny, strapping football star, the small, short genius who was homeschooled up until the first month of the eighth grade, and the girl new from Philly – all end up in the same first period art class, Introduction to Clay, and with a few false starts, become friends. 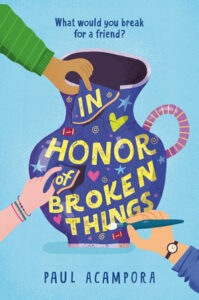 There are some really interesting dynamics in this book. West Beacon is on the outskirts of Philly – really in the coal mining/country-adjacent area of Pennsylvania, and the school is a small Junior/Senior High hybrid, where football reigns supreme. Readers unfamiliar with the area might expect that the characters in the book are mostly white, but they aren’t – there are Dominican students aplenty, one Mexican-American student, and white students… and the white teacher tries to inform the classroom about El Dia de los Muertos to honor the Spanish-speaking students, which the students inform him is… interesting, but not their culture. He’s embarrassed (and well he should be), and through repeated awkward things he does shows that he means well but often strikes out in understanding his students. The principal, Mrs. Ballard, speaks in exclamation points, and only cares about Oscar because he’s her chance at glory – a bigger school district and a better paying job because her school will have gotten the State to glory (via football, of course). Her falseness of character is really clear – and really says some things about football culture that I expect will be surprising to readers. Even Father Pete occasionally says dumb things that are cringe-worthy from the perspective of his niece and her friends. The characterization of the adults as ham-handed is interesting — readers take from this that the adults aren’t infallible, and that them advocating for their friends and fellow students is just as important as teachers doing so.

Because of the art focus, clay is practically a character on its own. It is shown to be, in various states, a messy, sticky, tricky thing that mostly clings to the students’ hands – except for Noah’s, whose parents are professional potters. While Noah makes creating look easy, for Riley, it takes making mistake after mistake, and for Oscar, it takes learning to use the potter’s wheel for them to get in touch with their artistic sides. Each of the students have their own small fissures and cracks beneath the veneer of junior high – losses and changes that have made them silently afraid or angry. While the novel’s conclusions – that they just have to keep going, keep trying, slap the clay on the table and shape it again – aren’t necessarily groundbreaking, they’re presented in a warm and wonderful way that I imagine would make readers reluctant to leave this little world. I would have reread and reread this book as a tween, and held it to me like a hug.