This book is a 2010 (yep, last year, because I can never quite catch up on the TBR pile) Cybils nominee for teen sci-fi/fantasy. 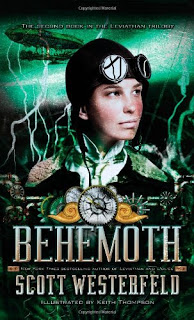 Reader Gut Reaction: The second installment of the steampunk alternate history trilogy by Scott Westerfeld (the first book was Leviathan) continues the friendship of unlikely shipmates Alek, prince and heir of Austria-Hungary, and the young Scottish midshipman Deryn, who is still managing to keep up her masquerade of being the boy Dylan. In the first book, the outbreak of WWI meant the death of Alek’s parents and his flight from a mountain stronghold with a few choice men. They hitched a ride on the British fighting airship the Leviathan, where Deryn/Dylan was serving after joining the forces.

Now, the Leviathan has tangled with a new German weapon and must land in the city of Istanbul, which hasn’t quite chosen a side in the war, though German Clanker technology has made inroads. The British, of course, plan retaliation with a new weapon of their own. Alek and Deryn realize that it might be up to the two of them to find a way to keep things from escalating.

I have to be honest–though I quite liked the first book, I wasn’t as engaged with it as I turned out to be with this second volume. I really enjoyed this one. And, as before, I love the fact that this is an illustrated book, and Keith Thompson’s images are a perfect fit for the story.

Concerning Character: The main characters of Deryn and Alek became more developed and fleshed out in Behemoth and that made them more relatable for me. This was especially true for Alek, who I couldn’t relate to as much in Leviathan. He felt like a Draco Malfoy type with an insufferable sense of princely entitlement (testament to the author’s writing abilities–it was a very convincing portrayal). But in this volume he gets to prove his mettle and show a humbler and also more mature side to his character. He’s also helped along by an appealingly cute and intelligent little creature–newly engineered by the British Darwinist Dr. Barlow–called a perspicacious loris. (If you want to see something amazingly cute, just do a Google image search on lorises.)

Deryn, too, gains complexity in this book, but in her case, the stresses of hiding the fact that she’s a girl are starting to weigh on her as she proves to be more and more successful as an officer. Not to mention the fact that she’s not sure how she might feel about Alek, and the other fact that Count Volger seems to have more than an inkling of her secret. The author does a skillful job of intertwining the character development with the plot so that they progress in a way that feels natural but never loses its tension and suspense. And can I just say how much I love all the strong, smart female characters in this series?

Themes & Things: These are very much two hero characters who overcome various high-stakes and adventuresome challenges, and develop a sense of individuality, ethics, and social consciousness along the way. The costs of war have been an idea very much at the forefront of this story from the beginning, with both characters having experienced the human cost of war. The often complex nature of relationships, of course, is brought into high relief as Deryn realizes that she might have feelings for Alek, while he has no idea she is even a girl.

Authorial Asides: Scott Westerfeld has a most excellent blog. You should read it.

You can find Behemoth at an independent bookstore near you!