It’s Wicked Cool Wednesday already. This book is “overlooked” in that it was released in 2009 – and its sequel released in October of 2010, so I’m way behind the curve. Happily, it’s sometimes more fun to catch up this way — no pauses in between finding the next episode of the story!

Reader Gut Reaction: Y’know, I saw this book, oh, months and months ago, but the US cover had the word “shifter” on it, and I didn’t look very closely except to say, “Meh,” and go on. Upon more recent and closer inspection, I saw a variety of covers and titles – the UK title is The Pain Merchant. Once I saw the subtitle, “The healing wars,” more of my interest piqued. A good thing, I now see – this series gallops forward with lots of action, heart, and though, with crossover potential. I am eager for the next thing from author Janice Hardy. 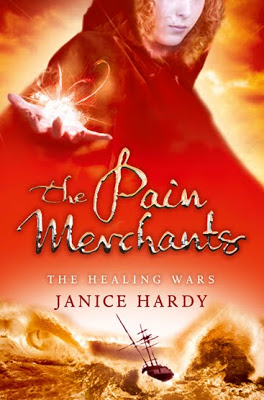 Concerning Character: Nya from first blush appears to be a typical orphan – ratty clothes, desperate straits, thievery. It soon quickly becomes apparent that those are only the side details — she’s a child of a nation that has been at war for years, and she has a skill that is both strangely valuable and makes her anathema. She is a Taker – she can shift pain from a person, but unlike the League healers, or healers-in-training like her sister, Tali — Nya’s unable to truly heal. She just takes the pain into herself, and passes it to her sister to secretly dispense it into The Slab – a big piece of magically enhanced metallic rock called pynvium. Takers are considered flawed – The Healer’s League shuns them, and the Duke wants them hunted down. Between the wars and the poverty and the Ducal edict, no wonder Nya’s life is a mess.

On a Very Bad Morning when a theft for food has gone badly awry, Nya discovers that she can quiet her conscience enough to shove Taken pain into someone else, instead of giving it to Tali to give to The Slab. She’s in trouble when she does it — both because she’s broken her own internal rules, and also because people talk, but once she’s done it… well. What’s done is done, right? Nya needs her freedom – and her life. She’ll do it again, if she has to…

There are pain merchants in Nya’s city who pay people to give them pain, so that they can sell it to the enchanters, who enchant it into the weapons used for war. It’s a nasty, unhappy business, and keeps the healers — and some shadier Takers — busy. It’s necessary, though; people have to put the pain somewhere, and from what Tali tells Nya, there are more and more horrible cases to deal with lately. The healers are being worked off of their feet. Some poorer folk can’t afford real healers, and weaken and die, even after pain is gone. And there are whispers that the Takers in the whole city are being used for something darker, something the Duke wants. When Nya’s sister Tali disappears, rumors of war abound, and Nya finds that there may be more evil truths in store… 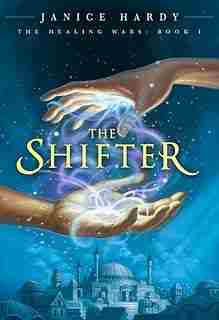 Recommended for Fans Of…: The novels of Tamara Pierce, specifically the Immortals series, and the Circle of Magic books (Briar’s book, especially); the Jackaroo novels by Cynthia Voight, Graceling by Kristin Cashore, and The Blue Sword by Robin McKinley — if you like your novels with strong female leads, and enjoy reading about resourceful people in a time of national conflict, this is your kind of book.

Themes & Things:At first blush, this book is pure fantasy, but there are deeper layers – politics, identity, and the idea of what makes up a family. I loved the camaraderie, trust, and teamwork the principle characters find, and Nya’s ethical struggles deepen this beyond just a good story. Can a single individual take on the ever-warring state – so clearly in the wrong – and win? This series aims to find out.

Authorial Asides: Janice Hardy blogs at The Other Side of the Story, and offers up writing advice, amusing commentary on the writing life, and book information, including the fact that the THIRD sequel to this series is coming out October 4, 2011!

You can find THE SHIFTER in its American incarnation or under its British title, THE PAIN MERCHANTS at an independent bookstore near you!