Dear FCC: I received a review copy of this book from the publisher, First Second. 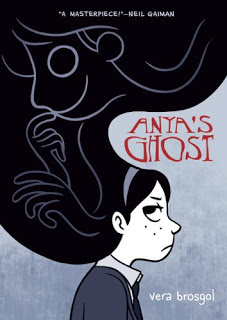 What if you made friends with a ghost and she turns out to be a bit more than you bargained for? What if you can’t get her to leave you alone, and you’re starting to wonder if you’ll ever get your normal life back? The graphic novel Anya’s Ghost is about a lot of things: friendship, school, romance, fitting in—and it’s got a healthy dose of ghost story to boot.

Reader Gut Reaction: When I saw that the author testimonials on the cover were by Neil Gaiman, Scott McCloud, and Hope Larson, I already had a pretty good inkling that I was going to enjoy this book. And I did. It struck just the right balance between funny, poignant and creepy—an odd combination, perhaps, but it worked for me. The art style was simple and engaging, too, and reminded me quite a bit of Hope Larson and Raina Telgemeier. It also reminded me of Marjane Satrapi’s work in Persepolis, in its ability to work well with a monochromatic format.

Concerning Character: For me, character development in graphic novels is inextricably tied to the characters’ visual representation as well as their dialogue—the way a character expresses herself visually is critical to how I see her. In this case, Anya—our main character—is kind of a nobody, and she’s more or less okay with that. She wants to fit in, not be picked on for her long Russian last name, or her accent, which she’s worked hard to eliminate, or her generous frame, which is decidedly not an asset in gym class. She’s a little snarky, sneaks cigarettes, and occasionally skips class, but she’s generally a good person. But everything changes when she meets a ghost named Emily. At first, having a ghostly friend is kind of awesome. At first…

Recommended for Fans Of…: STRONGLY recommended for fans of Hope Larson. Also for fans of graphic novels about learning to just be comfortable in your own skin, like Skim by Mariko Tamaki and Jillian Tamaki (reviewed here) and Katman by Kevin Pyle (reviewed here). May also appeal to fans of stories that manage to be both charming and spooky, like Neil Gaiman’s Coraline.

Themes & Things: I really liked the ongoing theme of trying to fit in as an immigrant/child of immigrants, and learning to see one’s background as an asset rather than simply a burden. It was very nicely done, and added a lot of meaning and depth to the plot. Another strong theme in this book is the idea that who someone is on the inside and who they appear to be on the outside don’t necessarily match up, and it’s worth getting to know people a bit better before making a final judgment about their character.

Authorial Asides: This is the author’s first book, though she has contributed short pieces to the Flight anthologies, and in my opinion, it’s a really outstanding and promising debut. I will definitely be keeping my eye out for more of her work. I’m generally really impressed with the quality of talent that the Flight books unearth; this is no exception.

You can find Anya’s Ghost at an independent bookstore near you!