Congratulations are in order…

The shortlist was selected by a panel of experts from the Irish literary community including editors, librarians and book retailers. The shortlist comprises 50 of the best and most popular books written by Irish authors over the last 10 years and truly represents the interests of all readers across every genre. It included internationally renowned Irish authors and national treasures such as William Trevor, Eoin Colfer, Anne Enright, Colum McCann, John Boyne, among others.

“When Derek Landy’s Skulduggery Pleasant first came to prominence, Derek was hailed as a literary sensation, an unknown author who secured a seven figure sum on the back of a debut novel – not an easy crown to carry,” said Tom Owens, Chairman of the Bord Gáis Energy Irish Book Awards. “However, not only was Skulduggery Pleasant a huge international success, it mobilized many young people not only to start reading but to get passionate about reading.” 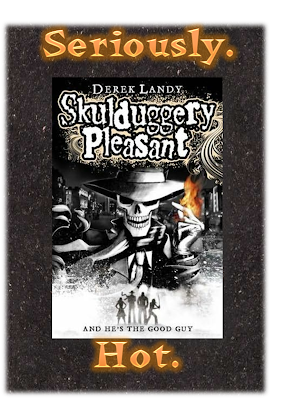 Author Derek Landy says that he “seized the chance to write about all the things that I love: monsters, magic, martial arts, murder and mayhem.”

Skulduggery Pleasant, now published in thirty languages and with a major movie in development at Warner Bros, is one of our favorite series IN THE WORLD, and we stand by our claim that Skulduggery is a hottie.

The Bord Gáis Energy Irish Book of the Decade competition was devised primarily to encourage reading and to build awareness of Irish authors. For more information on the awards, go here.