Time for another recap!
It’s weird — it was something like FEBRUARY when my bookbuddy Charlotte mentioned in passing that she’d read a book called Poison Study by Maria V. Snyder, but that was all it took to fix it in my mind that it was a book I wanted to read. Charlotte was re-reading it at that point, and now I know why: It’s that good. I ran across an amazing review of it at Em’s Bookshelf. Her review is better than mine would be, so definitely read it — then read the book. Wow. If you liked Kathleen Duey’s Skin Hunger, you’ll enjoy this — and I was thrilled to bits to know there are two more in the series. Must. Get. To. Library! Woot!

Colleen raved about Lonely Werewolf Girl and it was just as random and insane and fun as I expected. You’ve got to love that about a novel. Werewolves. Bands. Strange fey creatures. And clothing designers. It’s …flippin’ surreal. A teensy bit too long but sometimes the bizarre just cannot be contained, I’d say.

I also enjoyed — more painfully — I Wanna Be Your Joey Ramone. I have to admit that I had to put it down a couple of times, because… it hurt, frankly. Living your life looking for the person who was supposed to love you the most — and then picking yourself up and regrouping, and realizing that you can love the ones your with, for real? Is wrenching, and pretty deep. Read Jocelyn’s review. 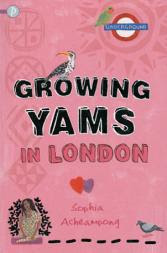 But one book I’ve read that no one in my circle has reviewed is Growing Yams in London. Written by British-Ghanaian author Sophia Acheampong, this is a fun and crazy read.

Makeeda — a typical London teen with drama to spare and mad texting skilz — is a girl whose family are also her friends. Tanisha, a cousin from America, is visiting before she goes off to Ghana to volunteer and see their grandmother. Tanisha is cool and smart, and Makeeda admires her — and resents her. Makeeda’s mother seems to prefer Tanisha to her own daughters, and sure, it could be because Tanisha’s the only child of her baby sister who died, but why can’t she like Makeeda and Delphinia, her own daughters, as well? Makeeda doesn’t have too much time to ponder that sort of depressing stuff, not when it’s her cousin Mel’s birthday party, and she’s bound to have boys over. Even without her best friends, Bharti and Nick along, Makeeda’s hoping to have a good time.

Life after the party goes better than Makeeda could ever have hoped. The DJ, Nelson, is beyond cute, and is actually interested in her, despite the fact that she made a fool of herself every time she opened her mouth. At school, Makeeda’s finally figured out an inspirational woman on which to write her history essay — and she’s even Ghanaian! And Tanisha is finally, finally leaving for Ghana, and Makeeda, though she will miss her cousin, will hopefully get her mother back.

Everything would be cool, if it weren’t for the fact a.) Makeeda’s not supposed to be dating — but she is… and lying about it, AND b.) Mrs. Hipman, Makeeda’s history teacher, disapproved her history essay topic — and Makeeda decides to write the essay anyway, AND c.) Makeeda’s best friend, Bharti, is having some kind of …issue, just because Makeeda forgot to do her one little favor! Suddenly, Nick is acting weird, and Bharti and Makeeda aren’t best friends anymore. It’s tough enough being just a regular girl — but Makeeda’s having trouble dealing with the Ghanaian side of her life, too. Why do her parents and Aunties have to be so disapproving that she can’t speak Twi? Why does her über-Ghanaian cousin Afua have to be such a… pain?! What’s wrong with everyone?!

Despite cultural differences and minor changes in outfits and accents, the drama and hilarity within these pages could happen to anyone from any world. Acheampong has created a fun glimpse into London teen culture, and the quick-paced storyline is colorful and insane. The less breezy bits, about self-worth and self-discovery are seamlessly joined with the whole, making this a really fun read.

You can encounter the fabulous Poison Study, the surrealist and deeply amusing Lonely Werewolf Girl, and the brilliant and fierce I Wanna Be Your Joey Ramone, and finally Growing Yams in London at an independent bookstore near you!