Mostly we read YA-oriented fiction and graphic novels around here, but every so often I get tempted into a few graphic novels for kids, mainly because the books released by companies like Toon Books and First Second are so appealing, of such high quality, and so nicely produced that I can’t resist giving them a mention. Today I’ve got a few from First Second, and then a quick revisit of a YA graphic novel that was a Cybils nominee a couple of years ago. 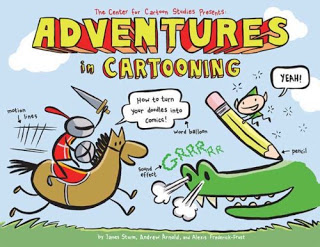 I was not at all surprised to find out that the authors of Adventures in Cartooning gave major props to Ed Emberley, who produced many a kid-friendly volume on how to draw all sorts of things from animals to vehicles to people. (I myself spent many hours obsessively drawing according to Ed Emberley’s step-by-step instructions, when I was little. Um, littlER.) This step-by-step guide to the fundamentals of cartooning and comics introduces kids (and adults) to the language of comics as a medium, using basic and non-intimidating building blocks. All of it is couched within a story that demonstrates as it entertains—the story of a princess who wants to make comics, and the Magic Cartooning Elf who helps her along the way. Much, much fun. 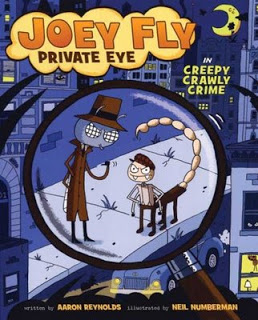 Also from First Second comes Joey Fly: Private Eye in Creepy Crawly Crime. It’s just what it sounds like from the title: you’ve got your noir detective, your over-eager assistant, and your dame in trouble who turns out to BE trouble. And, of course, there’s a mystery to solve. With bugs. Because, of course, Joey Fly is, well, a fly, his assistant’s a young scorpion, and the sexy dame is, as you might expect, a butterfly. There’s a lot here to entertain older readers as well as kids—the puns and turns of phrase are particularly rewarding if you have any familiarity at all with traditional detective fiction, and I can absolutely see this being a fun one for parents to read aloud to (or with) kids. The illustration is reminiscent of old-school funny pages—simple but expressive—and there are a lot of entertaining visual details to reward repeated readings. Bonus: Fans of funny pages and quaint classic cartoons might also enjoy Tiny Tyrant, Volume One: The Ethelbertosaurus, chronicling the continuing misadventures of a six-year-old king who’s constantly getting into trouble. 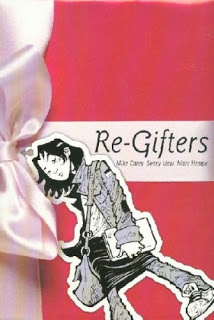 Now, for older readers, a butt-kicking, girl-power, martial arts mini-epic from Minx that I only recently was able to get hold of from my library: Re-Gifters by Mike Carey, Sonny Liew, and Marc Hempel. Dik Seong, aka Dixie, lives in L.A.’s Koreatown in a bit of a tough neighborhood, but luckily for her, she’s into the martial art hapkido, so she can defend herself physically. And she’s GOOD—really good. Too bad she can’t defend herself against the charms of Adam, a fellow talented hapkido student. He’s cute, great at hapkido…and she has to fight against him in an upcoming tournament. Although this one nods a few times in the direction of manga (or manhwa), it has a deeper appeal that lies in the sympathetic narrator Dixie and the strength of the story itself. I was definitely cheering for her the whole time, and since I did a little hapkido ages ago, I enjoyed the choice of that somewhat lesser-known martial art as the focus of Dixie’s interest. I think this would potentially have appeal for male readers as well, because of the martial arts element and because Dixie’s not a girly-girl. Very strong all around—I hope to see future work by this creative trio, even though DC sadly put the kibosh on Minx.