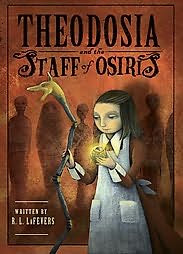 I don’t think I need to tell you how much we here at Finding Wonderland are squealing Theodosia fan-girls, do I? Good. Suffice it to say that we found her first adventure, Theodosia and the Serpents of Chaos, to be rollicking, surprising, and refreshing fun.

Our twelve-going-on-thirteen-year-old heroine is back in Theodosia and the Staff of Osiris, and her second dive into danger and intrigue is just as enjoyable as the first, if not more so. The sinister secret society the Serpents of Chaos are now back in London, and they have it in for Theodosia, who foiled them quite soundly in the first book. And, sure enough, some strange things are happening around her parents’ antiquities museum—and in all the museums of London.

Mummies are disappearing—and reappearing in her parents’ museum! Suddenly her father is a suspect, and Theodosia herself is the only one with the resources and the supernatural knowledge to clear his name. Fortunately, she’s found a clue in the form of a very odd magical artifact in the museum basement. But she’s also got her hands full with other matters beyond her control: an animate and rampaging jackal statue, an oily and overly ambitious assistant curator, and a grandmother who’s hell-bent on finding her a proper governess to keep her under control.

There’s excitement left and right in Theodosia’s second adventure, and you’ll find the heroine just as fearless, witty, and clever as before. This is a sequel that has me hoping for more…

Buy Theodosia and the Staff of Osiris from an independent bookstore near you!