This book is a 2008 Cybils Finalist for Middle Grade Fantasy and Science Fiction. 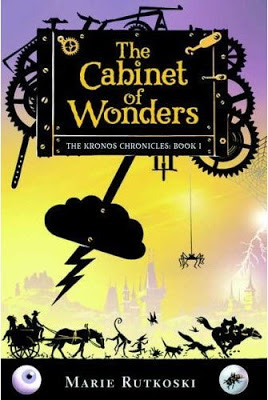 Petra Kronos is not really an ordinary girl… mainly because ordinary people have ordinary families and ordinary pets instead of magical tin spiders, and occasionally ordinary people brush their hair. Petra hasn’t had to do a lot of stuff other girls have to do, and she’s actually enjoyed that. Even arguing with her bossy housekeeper, Dita, has its amusing moments. But, when her father comes home with his head wrapped in bloody bandages, Petra’s world crashes to the ground. Her father was a brilliant wizard, but without his sight, he’ll never be able to create again. Everything in their lives depending on her father’s wizardry, and the patronage of the prince of Bohemia. And now…

Petra’s got to get his sight back.
But, how?

Accompanied only by her scattered wits and her sleepless and wise pet, Petra heads for the city for the adventure of a lifetime.

You will not want to put this book down. SERIOUSLY.

Buy The Cabinet of Wonders: The Kronos Chronicles, Book I. from an independent bookstore near you! And be really grateful there’s a sequel!!!