Detailed, Aquafortis mentioned, and yes, Dickens is that. I note my chapter recaps getting longer and longer and LONGER, so I attempt herewith to reign them IN. To the text!

I think the word that best describes this chapter is selflessness. The 19th century penchant for sentiment-drenched moments of epiphanies between friends is here clearly seen, as Lucie and her father exchange remembrances the night before Lucie’s wedding. Yes, it’s slightly cloying, to my personal sense of familial affection, but it’s also sweet. Lucie clearly doesn’t want to abandon her father, and her father, the esteemed “Doctor of Beauvais” does not want her to waste her life nursing him. He actually talks about his past here, more than previously, which gives Lucie chills.

“My child, you did see him, and it is Charles. If it had not been Charles, it would have been another. Or, if it had been no other, I should have been the cause, and then the dark part of my life would have cast its shadow beyond myself, and would have fallen on you.”

It was the first time, except at the trial, of her ever hearing him refer to the period of his suffering. It gave her a strange and new sensation while his words were in her ears; and she remembered it long afterwards.

The Doctor is well pleased that Lucie is to be married, and their household undergoes only the slightest change; Lucie will simply take the rooms above where her father lodges, so she will always be near him if he needs her, but has her own home as well. No word on where Miss Pross will stay.

So, this is the night before Lucie marries. I still recall that on the morning of the wedding, Charles will tell the doctor his real name. Despite all being restful and peaceful in the light of the full moon, I don’t think that will go well.

Ch. 18 ~ Nine Days
“You were a bachelor in your cradle.” Now, there’s a line to which there’s no easy comeback! Ah, my dear Miss Pross is back — sniffling and slightly ferocious and completely necessary to render the wedding not completely bile-inducing. I love how she and Mr. Jarvis get along, and though she tells him he was cut out before birth to be a bachelor, I think she has a wee soft spot for him. After all, the woman loves hats — can’t dislike a man who likes his wigs…

As it turns out, Pross and her ferocity are hardly needed to keep the chapter from being a bilge-fest; Doctor Manette came out from talking to Charles looking quite pale and haunted, and the moment Lucie’s carriage drove away, he fell into his old madness… for nine whole days.

And dear Mr. Lorry, for the first time in his life, took time off from Tellson’s to watch him, in hopes that he’d come back to sanity. 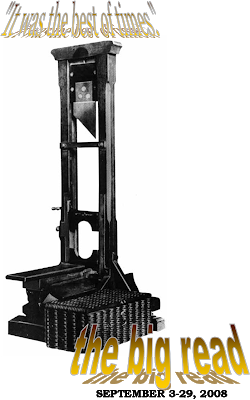 Aaargh! WHY did Doctor Manette wait until the very last minute for Charles to tell him the truth? And WHY did he never tell Lucie? I remember in the last chapter, he talked a lot about having a son to revenge him, and a son to know his story… and a daughter to show him her house and children. Okay, so there’s my answer. Lucie of the Agile Brow is obviously no bloody help. Hmph.

Ch. 19 ~ An Opinion
…and then, suddenly SNAP! And everything is back to normal. Sort of.

I grow to respect Mr. Lorry more and more, in these chapters. Before, I thought him a dry stick, a clueless old duffer, to press Miss Pross as to the reasons for Doctor Manette’s never speaking of his mental illness. Now he shows himself to be the soul of tact and courage as he broaches the difficult subject, in the name of “a friend,” and allows the poor Doctor Manette to know that he has, in fact, slipped his cogs and gone shoe-making mad once again.

“Now, did you ever see him,” asked the Doctor, distinctly and collectedly, though in the same low voice, “engaged in that pursuit originally?”

“And when the relapse fell on him, was he in most respects -or in all respects- as he was then?”

“I think in all respects.”

19th century readers were familiar with Bedlam Hospital, and its horrors. Dickens must have been deliberately freaking out his readers – and trust me, even sans Bedlam, it’s working. Poor Doctor Manette. And the worst things of all is that he doesn’t remember what set him off… and Mr. Lorry has guessed very wrongly indeed what it was.

On the night of the day on which he left the house, Mr. Lorry went into his room with a chopper, saw, chisel, and hammer, attended by Miss Pross carrying a light. There, with closed doors, and in a mysterious and guilty manner, Mr. Lorry hacked the shoemaker’s bench to pieces, while Miss Pross held the candle as if she were assisting at a murder for which, indeed, in her grimness, she was no unsuitable figure. The burning of the body (previously reduced to pieces convenient for the purpose) was commenced without delay in the kitchen fire; and the tools, shoes, and leather, were buried in the garden. So wicked do destruction and secrecy appear to honest minds, that Mr. Lorry and Miss Pross, while engaged in the commission of their deed and in the removal of its traces, almost felt, and almost looked, like accomplices in a horrible crime.

Ch. 20 ~ A Plea
Ah, the darling and dissolute Sydney returns! I adore Sydney. I can’t help it. He’s so honest. I aspire to Miss Pross’ ferocity and Mr. Carton’s honesty — to go around and tell people, “No, you don’t like me. And I don’t like you. Let’s get over ourselves!” is kind of refreshing, if a bit terrifying. And now he’s extended his terrifying uncouth manners to chide Mr. Darnay about using figures of speech instead of saying what he really means.

“Ah!” said Carton, with a careless wave of his hand, as if he waved that away. “On the drunken occasion in question (one of a large number, as you know), I was insufferable about liking you, and not liking you. I wish you would forget it.”

“Fashion of speech again! But, Mr. Darnay, oblivion is not so easy to me, as you represent it to be to you. I have by no means forgotten it, and a light answer does not help me to forget it.”

Charles: Sydney! Of course we’re friends.
Sydney: No. We’re not. But we should try now.
Love it. Although, it really brings the questions as to why Syd wants to be his friend… for Pure Lucie’s sake? Lucie, of course, goes all Eyebrows and Concerned on her husband’s behind when he says even the tiniest thing about Syd, and he has to kiss her dear, sweet widdle compassionate tears away. Gak. Lucie still wears me out, but at least she’s safely married now, and maybe we can focus on something other than her forehead for a chapter or two…

Tune in next time to see if Doctor Manette rebuilds his cobbler’s bench, if Miss Pross should take to more outrageous millinery choices, and if Mr. Lorry might declare himself to her once and for all…