…presented by TadMack and a. fortis for your reading pleasure.

a. fortis: I have to start off this post by saying that I am not a huge fan of vampire books. I’ve read some of the requisite classics like the Anne Rice quartet, as well as some modern-day popular series like the Twilight books. But there have really only been one or two vampire novels that had me jumping up and down, which is why I found :01 First Second’s recently-released books about bloodsuckers so…er…refreshing.

TadMack: I’m not much on vampires, either. First up, I came to the whole Joss Whedon thing late. As in, REALLY late. As in, I was in grad school and met a fellow Mills-ite who was doing her thesis on something like ‘postmodern feminism, the transgressive woman warrior and the eradication of patriarchy in Buffy the Vampire Slayer.’ And I thought, What? Seriously?

Yes. Seriously. And BTVS is a nuanced and multilayered – and completely ridiculous and humorous – piece of television history that was well worth her critical analysis. At her urging, I watched episodes (still not all of them yet) of the show, laughed at the dialogue, examined the themes, and got a kick out of the whole thing.

But tortured, bleached-blond, undead dudes aside, I still am not into vampires. Much.

a. fortis: Yes, all discussion of hotties aside…and pushing aside our biases…we thought we’d share with you what First:Second has been up to vampire-wise, along with a few other bloodsucker tales which have had us… uh…drooling. 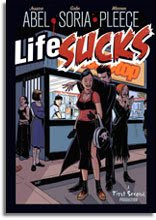 Life Sucks, by Jessica Abel (of La Perdida fame), Gabe Soria, and Warren Pleece, introduces us to Dave. Dave works in an all-night convenience store, gets made fun of for being vegetarian, and has an enormous unrequited crush on Rosa, a cute Goth girl who hangs out at the juice bar next door. Doesn’t sound too abnormal…until you throw in the fact that he’s a vampire. Refusing to drink human blood makes him…well, a bit of a weenie in the vampire social circles.

Plus, his Romanian boss (and vampire master) is your typical convenience store mini-tyrant, shouting at his hapless employees in a thick accent and then going off to play cards with his old-country pals in a cigar-choked back room. But Dave’s coping, more or less, and his roommate, a childhood friend, is down with his alternative lifestyle. And then…Dave’s potential love interest catches the eye of Wes, a mildly homicidal, ultra-competitive, surf-crazy vampire with a taste for human blood. This book was nicely drawn, well-written, and has a great sense of humor. Don’t miss the hilarious debate about the logic of vampire myth vs. vampire reality—cracked me right up.

Vlad Dracul Magnet School is the one the folks in New Sodom, Massachusetts, don’t talk about. It’s private, and the kids at Cotton Mather High and Our Lady of Perpetual Homework steer clear. Cody Elliot would like to steer clear of everyone in that state of Massachusetts, and make his way back to California, thanks. They’ve just moved to New Sodom, and his Mom hates it, he hates Cotton Mather, and the only one who’s happy is his Dad, who has the opportunity to be a partner in his new firm. Cody knows he has to do something to shake his father out of his blind happiness, so he devises a cunning plan to force his father to let them all go home. Though it takes a lot of work, he’s going to flunk every single class at Cotton Mather.

Wish that had worked. All it accomplishes is to encourage Mr. Elliot to pull his son out of public school… and at Vlad Dracul, boy do Cody’s grades improve. Fast. But…why?

Douglas Rees wrote Vampire High as a quick-paced satire that manages to be slyly funny while looking past the surface of human nature, honor and ambition, and what motivates us. It’s all about high school — really. 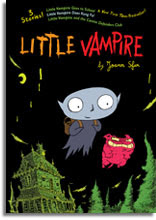 a. fortis: A book that’s sure to draw in younger readers and entertain older ones with its lush artwork and charming stories is Little Vampire, by Joann Sfar (a name some will recognize from this year’s Cybil award winner, The Professor’ Daughter). Little Vampire contains three short graphic stories starring, well, a little vampire boy, along with his flying red ghost dog Phantomato, his human friend Michael, and an array of silly, scary, and wonderfully drawn monster characters. The stories deal with simple, classic themes of childhood, and without being didactic, express ideas of family, friendship, loyalty, tolerance, and patience. But with monsters. It was honestly so funny and charming I wanted to cry. And there’s something very French about it, too. The artwork is fabulously cacophonous and perfectly suited to the stories. To tell you the truth—this might be the one I end up reading again and again. 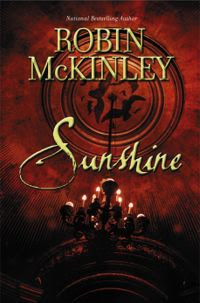 I just re-read what is possibly my favorite vampire book (and one of my favorite books, too, though that’s a very long list)–Sunshine by Robin McKinley. I’ll let TadMack’s review speak for itself, but I’ll also add that this is the book that inspired me to try baking yeast bread for the first time. Strange, but true. (The main character, Sunshine, is a baker in a coffeehouse.) I love that the book’s setting is sort of an alternate version of our own world, only with magic and magical Others–like vampires, were-animals, and demons. And there’s been a war with the Others, so it’s not like everyone gets along fabulously. In fact, Special Other Forces exist to hunt down Dark Others and prevent them from harming humans. Of course, nothing’s really quite that simple, and when Sunshine meets a vampire under unusual circumstances, her view of the world changes completely. If you haven’t read this one, YOU HAVE TO. Period.

TadMack: Sunshine is really well-written, and Robin McKinley, as she expertly balances tension and momentum in her plotting, could make a grocery list sound swell, so there’s much to like. At heart, Sunshine is a very edgy romance, completely UN-run of the mill, and, well, perfect because it is not like the rest. I’ve read a lot of books that include vampires, and usually… well, there’s a lot of eye-rolling. They cater to the transitory wish that many people have to be on their backs (*ahem*) and helpless about their fate – thus being more readily able to accept and embrace someone else being in control. McKinley only briefly goes there – and then moves away, while most vampire storylines wallow. To which I say a hearty, “Yuck, maybe?” None for me, thanks. If I’m going down bleeding? There will be no passive quivering. I’m going down with a sharpened stake in my hand.

I have what is commonly called A Bad Attitude, which is why I’m so fond of novels in which humans resist vampires. And win.

Helpless? Us? No freakin’ way! 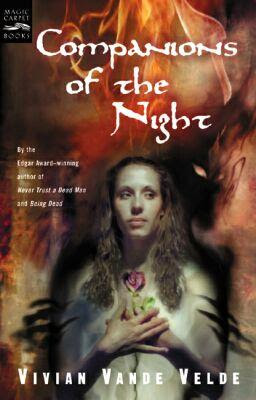 Vivian Vande Velde keeps the pace fast and the tension high, and the nightmarish insanity constant. Companions of the Night is an oldie but definitely a goodie.

Romance is de rigueur for vampire tales, but Kerry Nowicki is just going to the Laundromat – not the place where big romance happens, except in sitcoms. In Kerry’s case, it’s duty that brings her – her four year old brother, Ian, has had enough people let him down since their Mom left – and took the washer and dryer — last year. Dad’s asleep, and Kerry has her Learner’s permit, so she drives to the Laundromat to pick the stuffed koala bear Ian left behind earlier that day. It’s a college town, so it doesn’t matter that it’s eleven o’clock – the Laundromat is open and the bear is there somewhere. It’s just that there are some other people there, too – adults. And they’ve got a college student tied up, beaten and bloody. They swear he’s a vampire. Kerry takes a desperate gamble and helps him escape.

That should have been the end of the story.

But it never is, is it?. No good deed goes unpunished, and Kerry’s life turns into one long fall into the dark. I won’t give anything else away, except to note that this novel frames one of the fundamental questions of dealing with vampires: will befriending one find for you the love of your life? Or be the end of it? A novel about life, death, love — and choice.

Oh, all right. I can see some of you rolling your eyes at my Attitude. Yes. Vampires,

according to the lore, trump humans, every time. Outside of that weird counting tic they have (seriously. That dude on Sesame Street? Only resisted sucking all the other Muppets dry because he was forever counting. Think about it.) and the whole daylight/stake-in-heart/garlic/iron holy symbol thing, they’re unstoppable, and a modern vampire? Forget about it.

a. fortis: I totally agree about the Count, by the way. It’s like smokers, when they quit smoking by turning to chewing gum. He’s just channeling his bloodlust into a more acceptable OCD behavior. Anyway, back to TadMack’s overarching question:

TadMack: What happens if vampires actually worked together, to take over? Would humans really win? 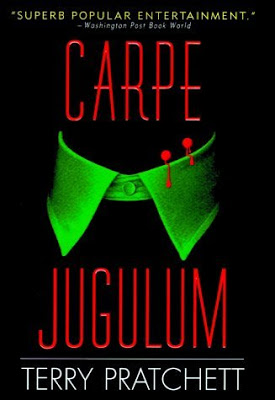 That’s what happened in Terry Pratchett’s twenty-third Discworld novel, Carpe Jugulum. King Verence of Lancre invites the vampires of Überwald to the christening of his daughter, in an effort of earnest goodwill which quickly backfires. The vampires mean to take over the kingdom, but the witches of Lancre won’t stand for it. Sadly, they might have to: Granny Weatherwax has vanished, Magrat is Queen and just had a baby, and Nanny Ogg has fallen under the vampires’ spell.

The only witch who can really make a difference is young Agnes Nitt. Agnes is an apprentice witch, unsure of herself, and in a constant state of internal conflict. There’s something else odd about Agnes. The vampires can’t quite put their finger on it, but her mind…intrigues them…

The young priest of Om who bungled his first christening is having a crisis of faith. Omnians have a history of burning witches, and now there’s a war going on, between witches and vampires. Oats thinks he should maybe be on the side of the witches… but that can’t be right, can it?

This novel — which isn’t marketed as YA but can easily be a crossover — is a fast and funny patchwork of almost every vampire cliché you’ve ever heard, but with a thoughtful, Pratchett-ian twist that changes everything. Sink your teeth in and enjoy.

It’s Vampire Month, and there’s a whole lot of biting going on! Check out the :01 First Second blog for more vampiring genius.