I write fantasy because it’s there. I have no other excuse for sitting down for several hours a day indulging my imagination. Daydreaming. Thinking up imaginary people, impossible places.

–from “Faces of Fantasy” by Patti Perret, Tor Books ©1996
Via Creative Quotations.

Patricia A. McKillip is made of awesome.
I love her old books, like The Forgotten Beasts of Eld, and I love her newer books like The Alphabet of Thorn.. I adored Od Magic and I thought I had her style down: enigmatic plots, lyrical language, well-paced, arresting, and absorbing stories that often surprise or anger, the reader enters them so thoroughly. What I loved about her was that her writing was fully in the make-believe past. Which is why Solstice Wood completely knocked me on my backside. 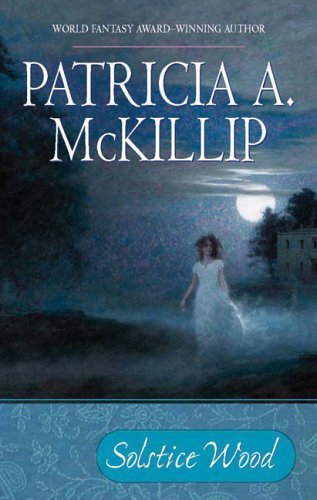 It’s a modern faerytale from the queen of mythical and medieval.

Sylvia Lynn has always meant to get back home, but it’s only when her grandfather dies that she makes the journey. She has lived with her grandparents — the kindest people in the world — since her mother died, but then she graduated and went away for college, and somehow, things just happened — time lapsed, there were books and studies and tests and jobs and now years have passed — and her grandfather has, too, and Sylvia is heartbroken.

See, there’s something about the dark and scary trees in Solstice Wood, and something about Sylvia that her grandparents, who raised her, don’t know… and it’s the reason she’s stayed gone all these years. It’s the reason she knows better than to stay at the house near Solstice Wood for very long. And no matter that her grandmother insists she stay and be introduced to the sewing circle, her group of loyal old friends in the Fiber Guild who sit in the parlor and stitch away their lives with her, Sylvia has no plans to stay. She can’t. What her grandmother doesn’t realize is that some things in life are more than they seem.

The story in this novel is told from various angles — we hear Sylvia’s bewildered and angry voice, her grandmother Iris’s grieved and determined voice, the voice of a family friend, Owen, and the voice of Sylvia’s teen aged cousin Tyler’s — and more. Slowly the world of Solstice Wood unravels, as the bright threads of Sylvia and Iris’ quiet existence are torn apart. Sylvia is furious to learn things her mother kept from her, secrets about the father she’s never met. Tyler is just trying to stay out of the way — and failing. Slowly, the reader is brought to the understanding that it’s not just Sylvia who’s been keeping secrets all this time.

This book isn’t strictly YA in that the protagonist is a recent college graduate, but that she is young and being bossed by a very determined grandmother helps to bridge this to YA readers. Also, Tyler, and later an alter ego of Tyler’s — is a perfect teen voice — a little clueless, right in the middle of things, and changing everything.

An almost completely G-rated urban fantasy for those who aren’t quite as comfortable with some of the darker elements of fey, this is really well told and ends with a lot of open doors — anything can happen next.

Wicked Cool Overlooked Books originated at Chasing Ray’s place, which features Cherie Priest and the freakiest book covers ever. The great reads continue with Little Willow talking up a new Tara Altebrando, and more will pop up throughout the day. Happy reading!