I absolutely adore Canada.
My favorite college professor — who introduced me to the works of my favorite Canadian adult author, Margaret Atwood — is Canadian. My first time sitting in a neck-deep spa-tub was in Canada (and trust me — that was enough to gain the country my undying love). And my very first piece of fanfiction at age 9 was set on the magical grounds of Prince Edward Island. Despite the whole Red Green thing (!), Canada gets some serious love from me. 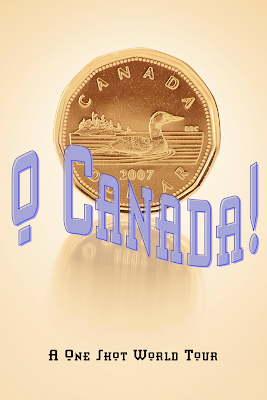 Like many books published outside of the U.S., books published by Canadian authors aren’t always readily available in American bookstores, which is a serious shame. This is why, until this last Cybils Season, I’d never even heard of Canadian author K.V. Johansen whose novel, Nightwalker, is not, in fact, her debut work. No, it’s one of nine novels she’s written!

NINE novels!? Where have I been?!

K.V. Johansen holds a Master’s Degrees in Medieval Studies and in English, which gives her work great details and historical depth. Her nonfiction book on children’s fantasy literature, Quests and Kingdoms: A Grown-up’s Guide to Children’s Fantasy Literature, is one that I would dearly like to own. It is a chronological overview of fantasy which received rave reviews from diverse audiences, including history teachers, the Mythopoeic Society, and librarians. It’s a great teaching tool or reference, and the style makes it appropriate for young adults, too. 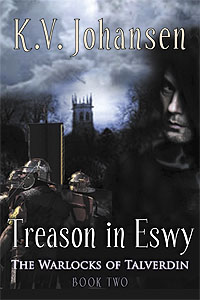 K.V. Johansen’s Nightwalker was added to VOYA’s Year’s Best Science Fiction, Fantasy, and Horror list for 2007, and you can find out more about her writing in these interview clips and on her very informative website. The videos of her reading portions of her work only whets your appetite to read more!!! Some great stuff here!

(Psst! Treason in Eswy, the second book in the Warlocks of Talverdin series, hit Canadian bookshelves March 1st. Has anyone else read it yet?? I’m looking for it in the UK — no such luck yet…)

And now, a BONUS Canadian for Writers:

However thin the stream of books flowing between writers and readers in our two countries, there has been one steady stream of writing wisdom coming from Canada in the form of Debbie Ridpath Ohi. Debbie kept me company those years after college when I was pretty sure I had a Great Novel Within Me, but kept getting in the way of my own prose. Inkspot was an amazing discovery, a writing resource that made sense. I avidly read the marketplace pieces, which kept me going between my Writer’s Market subscriptions. It was deeply ironic that my first major sale coincided with Xlibris buying out Inkspot — running Debbie into the ground, and then closing the site down. I must admit that I shed a few tears of rage, as this was a bummer of major proportions. There were other writing sites, pulled together by great people, but it just wasn’t the same. Of course, it isn’t like Debbie herself vanished or anything. This multi-talented Canadian was interviewed last year at Women on Writing. You can also find her blogging and drawing her quirky, amusing work at Inkygirl: Daily Diversions for Writers, which is where I also go to find Will Write for Chocolate. A favorite spot also is Debbie’s list of writers who were rejected repeatedly before they hit the big time. Read it, peeps. It’ll give you courage.

The One Shot World Tour concept rose fully formed from the fertile mind of our organizer, Colleen. The O, Canada! round-up at Chasing Ray includes the really adorable Daisy Dawson the CUTE ALERT monsters drawn by illustrator Kean Soo, and more. There’s still plenty of Canadians where these came from! (Um… Canada?) Enjoy the literary goodness from Our Neighbors to the North all day today!

(Props to Little Willow for the flag logo!)