This book is a 2007 Fantasy and Science Fiction Cybils Award Nominee. 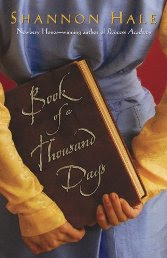 It all began when Saren said “No.”
She refused. Utterly.
She knew a secret about the man she was being asked to marry — an horrific and terrifying secret. No one believed her, but she knew what he really was, and what he did. She was betrothed, in her heart, she told her father, to a prince from a tiny kingdom. She would have no one except himself.

Her father locked her into a tower for seven years for her refusal.
Herself.
And her maid.

Saren wept. Maid Dashti took stock of their food and sang. She was a peasant girl, and a mucker, one used to dealing with cattle on the steppes. Healing was in her songs. Sure, she had lived in the wild, but since her mother had died, she’d had no safe walls around her. She’d sworn never to leave Saren, and so she wouldn’t.

When her mistress orders Dashti to impersonate her when the prince Saren claimed to have wanted to marry comes to speak to her, it is against nature and the very gods to do so, but Dashti does it — in terror. Only after repeated visits, conversations, small gifts and confidences does Dashti realize that she finds the prince kindly and sweet, and her heart begins to betray her. She reminds herself: she is only doing as she is told, only that. Eventually, the prince stops coming —

— and the evil man comes to them — sticks his gauntleted hand through the flap where their food is left, taunting them, threatening to set their straw-floored prison on fire, tossing in a few burning pieces of punk upon which they must fling themselves and their bedding to save their skins. The evil man laughs, and his voice sets their teeth on edge. Harried to the edge of endurance, Saren weeps and screams and even Dashti quails in terror.

But then, the evil suitor makes the mistake of shoving his face against the slot in the door.

Saren throws the contents of the chamber pot in his face.

Dashti decides there might be something to this girl after all. Between them – peasant and princess, steppes girl and pampered household pet – comes first an understanding. A friendship, of sorts. They try and communicate, to teach each other a little of the world that the other has known. But the days are long. It is hard. Sometimes the cold is mind-dulling, other times the heat has them lying prostrate on the stone floor.

And no one comes for them.
After the sounds of a terrible battle one day, there is no more food, only …wolves.
And then even the wolf sounds fade.

Seven years bricked into a tower may not just be an eternity — it may be their lifetimes. Dashti decides they’ve got to get out — and reclaim the world.

But can they do it?

A stupendous, creative and arresting retelling of a lesser known tale of the brothers Grimm, Shannon Hale’s The Book of a Thousand Days is a long-awaited treat.