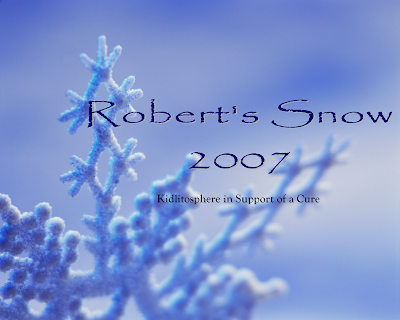 As no two snowflakes are exactly alike, everyone’s reaction to catastrophic illness is different. Robert Mercer and Grace Lin’s reaction was to fight like heroes to keep cancer from overwhelming them. We honor their fight, and the memory of Robert Mercer, who made a difference.

Awhile back, the 7-Imps interviewed Grace Lin, the driving force behind the Robert’s Snow: for Cancer’s Cure fund raising effort after Robert was initially diagnosed with Ewing’s sarcoma. Grace wrote Robert’s Snow (Viking Books; 2004) soon after that diagnosis. The fund raising effort entailed the auctioning off of special snowflakes, created by children’s book illustrators, whom Grace had gathered together in the name of raising money for the Dana-Farber Cancer Institute (DFCI). The auction raised a great deal of money in its first year after the publication of this book, which features these illustrators, many of them award-winning, and their creatively and uniquely designed wood snowflakes for the cause. One hundred percent of the royalties from the book’s sale went to the DFCI to support sarcoma research. Robert’s Snow is in its third year and has already raised more than $200,000 for Dana-Farber. (You can see the gorgeous 2005 snowflakes here).

This year, the auction is more important than ever. Cancer isn’t going away, and even though Robert Mercer’s time on this earth is finished, his and Grace’s gift to others whose lives are touched by cancer will continue. The 2007 online auctions for bidding on these hand-painted, five-inch wooden snowflakes will take place in three separate auctions, open to everyone, from November 19 to 23, November 26-30, and December 3-7. The Kidlitosphere will be featuring illustrator’s artwork, one at a time, so that everyone can see these unique celebrations of life and snow before the auction, thus raising their profile and hopefully exposing more potential auction participants. 7-Imp organizers Jules & Eisha have explained everything you’ll need to know to get involved in showcasing a snowflake at your blog yourself.

Some of you may wonder why we’re doing this for Robert, a man most of us have never met, and for Grace, a woman we only know via blogging — but it’s like this: you know someone with cancer. I know someone with cancer. Maybe several someones. This is something we can do for Grace, and for the Graces and Roberts in your life as well; not just hope for a cure, but actively do what we can to help raise money and awareness.

The kidlitosphere is a community. Coming together for the good is what a community does. Hope you can join in.