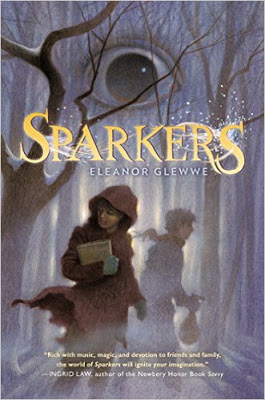 Synopsis: With cover blurbs from the likes of Rachel Hartman, Margaret Peterson Haddix, Anne Ursu, and Ingrid Law, the MG fantasy Sparkers by Eleanor Glewwe should have caught my eye earlier. I met Eleanor at a conference this summer and I’m a little embarrassed to admit that it was the first time her book landed on my radar—in part because she lives in my home state but also because this book came out in 2014 and somehow didn’t register. Better late than never! Not only do I get to plug a fellow diverse author, but I also get to spread the word about a promising, intriguing new fantasy series that will appeal to fans of books like The Magic Thief by Sarah Prineas and—yep, I’ll say it—fans of Harry Potter.

Unlike in the Harry Potter world, though, in this one, it’s the magicians who are in charge. Of EVERYONE. Sparkers—the colloquial term for halani, or people without magic—are the oppressed lower class in the city-state of Ashara. Kasiri—those with magic—run the government, have the best jobs, go to the best schools, and have all the advantages. That is, until a mysterious disease called the dark eyes begins striking halani and kasiri alike.

Marah, the narrator, is a bright student, a talented musician, a budding linguist…and a halani, in a society that’s been structured to keep her in her place. Then, a random encounter with a little kasiri girl in the marketplace leads to a new friendship with the girl’s older brother, Azariah, who is Marah’s age—fourteen. He, too, is interested in books and languages, even long-dead ones, and he has more books than Marah could ever imagine having. One evening, poring over one of those books, they find something amazing: something that might help them figure out how to combat the dark eyes. As the people they love begin to fall ill and die—including Marah’s deaf brother Caleb and Azariah’s little sister—Marah and Azariah pursue their secret cure and end up discovering shocking secrets about their magical society…

Observations: This book has such an intriguing setting. Even if I hadn’t known from the jacket bio that the author herself is a linguistics student, I might have guessed from the loving attention given to the language and culture aspects of world building. Linguists and those familiar with the cultures of the Middle East will recognize Hebrew and Arabic names, and sense the echoes of the uneasy coexistence of Arabs and Jews in places like Jerusalem. There are also echoes of the long history of religious texts and music and rituals and mysticism that seem to imbue the spiritual life of the Old World.

At the same time, it didn’t seem that the kasiri and halani were meant to represent specific ethnic or religious groups, which to me was a positive. The dynamics in the book didn’t, in other words, seem like stand-ins for real-life sectarian conflicts. For me, rather, this type of recognition subconsciously informed my mental image of the setting and characters. And it also helped create a very rich and well-developed world with a clear identity and history.

The intellectual bent of the characters was very appealing here, too—music and language are an important part of character as well as plot in this book. This makes it doubly interesting that Marah’s younger brother Caleb is deaf. Music is such a huge part of Marah’s life, and so is language, but his deafness is not an impediment to her sharing those things with him. They communicate through signs, and together with their mother, they are a close and loving family.

Conclusion: This was a unique story set in a complex and vivid world, with intriguing magic and recognizable, thought-provoking themes of class conflict and social change. Glewwe’s next book, Wildings, comes out in November and I will definitely be looking for it.

I purchased my copy of this book at the Mixed Remixed Fest. You can find SPARKERS by Eleanor Glewwe at an online e-tailer, or at a real life, independent bookstore near you!