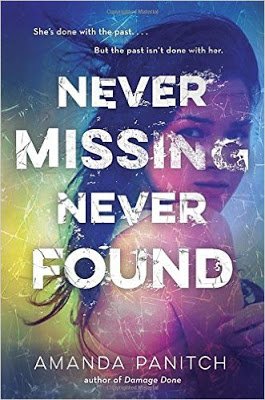 Synopsis: Suspense stories that deal with kidnapping and imprisonment (consider that your trigger warning) don’t always put an equally weighty focus on the aftermath of the trauma. This particular thriller suspensefully covers both the dramatic events and what comes after in alternating parallel storylines. And, of course, “what comes after” includes even more suspense and drama.

In Never Missing Never Found, we are introduced to narrator Scarlett, who was kidnapped and spent four years imprisoned in a basement with another girl before she was found wandering the side of the road. Her family moved to another city, far away, and tried to recover. Now a teenager, she is working at a local amusement park and finally feeling like her life is more or less on track. All except for her younger sister Melody, who just never managed to warm up to Scarlett after her return.

And then…a co-worker from the amusement park goes missing, a girl named Monica. Another co-worker seems to know too much about Scarlett, things she’s never told anyone here. The alternating past and present viewpoints add tension to an already gripping story without giving away too much at once, and the reader can only watch as Scarlett’s past, inevitably, catches up with her.

Observations: The author uses an interesting structural device to reinforce one of the story’s major themes: that we are the sum of the choices we make in life, that the results of those choices end up defining us in some fundamental way. Scarlett relates her story in terms of five critical choices she made along the way, from the day she was taken, on forward to the story being told in the “present.” It’s a device that could seem artificial, possibly, but it isn’t overused here. Instead, these carefully chosen critical moments are fleshed out and developed so that we understand the narrator more and more along the way. Ultimately it all seems to unfold mostly organically. I did have a couple of moments where I was surprised by Scarlett’s actions, and became skeptical, but all was explained in a rather nifty twist at the end.

Also, kudos to the author for having Latina main characters but having it not be a “thing.” It’s a part of their identity, but the story isn’t about that.

Conclusion: This is a good fast page turner for fans of suspense. I’ll admit I wasn’t sure about the plausibility aspects of some parts of the story, but I was able to suspend my disbelief and just enjoy the action and the psychological twists. It reminded me of the Joan Lowery Nixon/Lois Duncan brand of thriller—which I devoured as a teen. I’m sure I would have enjoyed this one as a young adult reader.

I received my copy of this book courtesy of my library’s ebook collection. You can find NEVER MISSING NEVER FOUND by Amanda Panitch at an online e-tailer, or at a real life, independent bookstore near you!