I’m reposting this review in honor of the fact that I am, RIGHT THIS VERY MINUTE, traveling in South Korea, and this graphic novel was one of my earlier introductions to Korean culture and history from the perspective of literature. In fact, it’s a trilogy, and a lovely one. So I thought it would be a good time to revisit it, just in case I’m too busy to put up a new post while I’m gone…. 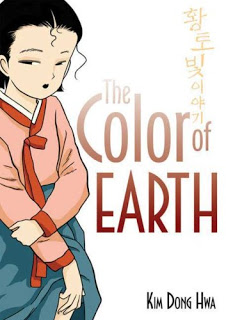 I was also looking forward to The Color of Earth, because it would be my first major foray into manhwa,
or Korean manga. This first chapter in the trilogy by Kim Dong Hwa
could be classified (in Japanese) as shojo, since the coming-of-age tale
of a young Korean woman may appeal most to female readers. (And this is
fabulous—I applaud any and all efforts to increase the amount of
graphic literature with appeal for young women, especially now that Minx
is defunct.) My understanding from the foreword is that this tale is
based on the life of the author’s mother, a sort of tribute to her
growing-up years in a rural Korean village. The artwork reflects this,
illustrating with sensitivity and vividness, remaining simple and
expressive throughout, yet unafraid to add flourishes and whole spreads
rendered in exquisite detail when called for by the storytelling.

The
story opens with Ehwa as a very young girl, living with her widowed
mother the tavern-keeper. As she grows older and into young womanhood
over the course of the book, we see her gradually gain insight and
understanding into not only her own growth and maturity, but also
into her mother’s life as a single female tavern-keeper, subject to all
sorts of racy gossip while also leading a relatively lonely existence.
At the same time that we get a window into traditional Korean culture of
the somewhat recent past, it’s the universal elements of the story that
will make it really resonate with Western readers—curiosity about one’s
own growing body, the opposite sex, and the lives of the surrounding
adults; loneliness and companionship and love.

I received my copy of this book courtesy of the publisher, First Second. You can find THE COLOR OF EARTH by Kim Dong Hwa and its two sequels at an online e-tailer, or at a real life, independent bookstore near you!