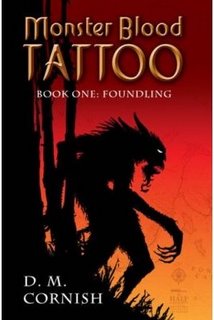 I am definitely enjoying this new crop (if two books is a crop) of fantasy books that, instead of eking further mileage out of a romanticized medieval/Renaissance setting, take place in a setting with 18th- or 19th-century technology—including firearms. It makes a straightforward adventure that much more fast-paced and dangerous, and monster-fighting that much more interesting.

Like Frances Hardinge’s Fly By Night, Monster Blood Tattoo (Book One: Foundling) by first-time Aussie author D.M. Cornish is set in a society where technology and weaponry have made some strides forward. Boats are propelled by strangely muscled engines, and cannons and muskets defend warships and city walls alike. In Cornish’s world of the Half Continent, this is a good thing, when monsters of various sizes are a constant threat to the unwary traveler. Only those who have slain a monster can boast a grisly tattoo inked from the monster’s own blood.

The opening of this older-middle-grade novel was a comfortingly recognizable orphan story—Rossamünd is a girlishly-named boy who has spent his entire life to date in Madam Opera’s Foundlingery, cared for by the maid Verline, educated by his learned tutors, and bullied by an assortment of oafish louts. I didn’t find myself fully absorbed right away; the fantasy world is so intricate that it was intimidating at first, and I spent a lot of time looking up terms in the lengthy glossary before I figured out that it really wasn’t necessary to consult the glossary to enjoy the story and learn the ropes of the setting.

So I think it’s actually a good thing that such an elaborate story has a rather slow start, because it does take some time to acclimate. Soon, though, I was hypnotized by some of the very details that had first bogged me down—the world is so fully realized that it completely immerses you, and the author’s obvious love of language and languages shows in each and every coined term and place name. Just listen: Proud Sulking, The Spindle, The Considine, Hergoatenbosch…Gastrine, lazhar, pugnator, vinegaroon.

If you’re an older reader—an adult, a parent, a librarian or teacher—or multilingual, you’ll recognize elements of various earthly languages, especially German and Latin, and be mightily impressed. Even if you aren’t a language person, it’s hard not to be engrossed by the very rhythms of the words themselves. It’s not to everyone’s taste—one reviewer on Amazon called them “bleeble blabble names”—but there are people who will say that sort of thing about, like, France. If you enjoy inventive fantasy, trust me, the names won’t be a problem. And if you get confused, there’s always the mighty Explicarium, the glossary in the back of the book, not to mention detailed maps, diagrams of clothing and ships, and calendrical information. It’s almost overwhelming. The author’s bookflap bio says he spent thirteen years bringing this world to life, and I can believe it.

There’s another thing I enjoyed about this book, and frankly made me predisposed to like it—the author has done both cover and interior illustrations. As both a writer and artist, this is an issue near and dear to my heart. Although I know that artwork is ultimately a marketing decision, I find it irksome when I hear how rare it is that an author gets input on the cover for his or her novel, and I find it discouraging that it’s generally a no-no for writers to submit their own art. As a trained artist (hmm…makes me sound like a trained ape), I find it difficult to stomach the idea of not having input on the artwork chosen for my writing, or not being able to do the artwork myself. So, more power to D.M. Cornish for having crossed that divide and for being so deliciously multitalented. He’s created a fully realized world in every way, and it’s an impressive achievement.

After the introductory chapters, Rossamünd leaves the Foundlingery to seek his fortune in the world. Along the way he meets an array of characters savory, unsavory, and somewhere in between. He even meets a monster or two, and learns the confidence to make his own decisions about the world despite his humble beginnings. By the end, I was captivated, and I can hardly wait to read the next installment in Rossamünd’s adventures—even though I might have to brush up on the Explicarium by then.