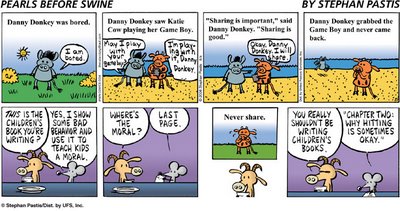 Comic Stephen Pastis reminds us that though Madonna did it, NOT EVERYONE SHOULD WRITE CHILDREN’S LITERATURE!
Stop it now, Rat.

A goody from NPR This Weekend is an excerpt from Daniel Woodrell’s ‘Winter’s Bone’. It’s garnering comparisons to True Grit and Dicey’s Song, and is described as well-articulated teen angst. Sounds promising!

I really wish I’d saved the Contra Costa paper the other day — someone took a picture of a church marquee that read ‘Believe it or not — it is NOT hotter than hell!’ Well, it’s hot…enough lately to boost book sales. Seriously. What else should you do when it’s too hot to even run the TV? Read!

Meanwhile, the L.A. Times reports that teens are …bored. A new Los Angeles Times/Bloomberg poll, the first in a series of annual entertainment surveys, finds that a large majority of the 12- to 24-year-olds surveyed are bored with their entertainment choices some or most of the time, and a substantial minority think that even in a kajillion-channel universe, they don’t have nearly enough options. “I feel bored like all the time, ’cause there is like nothing to do,” said Shannon Carlson, 13, of Warren, Ohio, a respondent who has an array of gadgets, equipment and entertainment options at her disposal but can’t ward off ennui.

Methinks it’s time somebody went to the library! At least that’s what my mother always said if I dared to even mention the ‘b-word’ between June and August: “Want to write me a book report?” Thanks, Mom.

On a related topic, those bored teens listening to music and not reading better watch out. Another study in the DUH category says there are other things ennui-ridden teens are encouraged to do in our hypersexualized culture. Really? Seriously? Who knew?

This has to have been the shortest summer on record. How did it get so late so soon?!
Happy Monday…