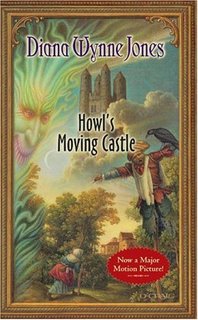 I’ve already said how much I like Diana Wynne Jones’ novels, and Howl’s Moving Castle is a classic. A little bit crowded with characters and undue chaos at the end, but a satisfying fairy-tale that thwarts the bad guys, helps the good guys, and has time for a perfectly happy ending. Of course, this novel has recently been made into a film-length cartoon, which is why I wanted to read it. Originally published in 1986, it’s been reprinted with a sadly less-spooky but more accurate cover.

As the oldest of the Hatters of Ingary, Sophie pretty much figured that she wasn’t going to have much of a life. The eldest SON might inherit, but the eldest daughter, well… in most fairytales, the youngest daughter inherits great riches, marries the handsome prince, and everything goes her way. The middle daughter is at least respectable and maybe has adventures, but the eldest…

Ingary used to be a quiet village, but things are changing. The Witch of the Waste is stirring, and the Wizard Suliman is missing, as is the King’s brother. The girls of Ingary are warned never to go out alone at night when a moving black castle appears in the hills above town, but it’s not the Witch. The castle belongs to the Wizard Howl, who eats girl’s souls or something. Sophie Hatter figures she’ll never meet him, and is sure her youngest sister is more in danger from him that she is. As Sophie does her boring job, making hats for her stepmother, little does she realize that her life is about to change. Sophie meets the Witch of the Waste. When Sophie meets her, things start to happen.

This is a huge plot that could hardly have been written by anyone else. There are mistaken identities, curses, identical sisters and spells. There are poems and doors that open to different cities each time the knob is turned and filthy windows and cranky fireplaces. This was a thoroughly delightful fantasy, though a little confusing at times, and I really enjoyed it. I doubt the movie will do it justice.