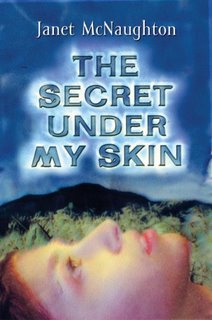 A disturbing yet beautiful book, Janet McNaughton’s haunting The Secret Under My Skin is hard to describe. It’s another dark future tale, but told in a way that incorporates greater detail about the environment, government responsibility and limitations, and the actions of the few to care of the greater good.
The novel takes place 2368, where the world has been poisoned by some type of environmental disaster commonly known as a “technocaust.” Living in this world is Blay Raytee, called Lobelia September, former 13-year-old street kid and now the ward of a model social welfare project, also known as a government sponsored workcamp. Doomed to a life of scavenging in a landfill in the summers and growing hydroponic food in the winter, Blay is a quiet girl who does her best to keep her head down, cause no dissent and make no waves. Her life wouldn’t be so bad except for a couple of things: one, that the workcamp is a scary place. On purpose. There are gangs within, and if the kids don’t rough you up, the wardens just might. Blay is lonely for another reason, one that she doesn’t share. Other kids have memories of their parents and their lives before, memories of who they are. But Blay has almost nothing. Fragments of memory, unanswered questions, and feelings of alienation trouble her.

Her ability to disappear into a story, and her ability to read saves her, and Blay is chosen to become the tutor of Marrella, a spoiled but beautiful girl suffering from her own chemical malady from a community outside the ravaged cities. Blay and Marrella live in the home of Erica and William Morgan. William, who is Master of the Way struggles to teach Marrella to read the land and its secrets, but it soon becomes clear that, although Marrella was chosen because of her sensitivities to environmental toxins, it is Blay who has the magic. The magic spills out of her, and changes her. Will she be content to let the world lie as she has found it? Blay wants to reach out and take hold of her life, but she’s only a nobody from nowhere. Maybe she isn’t worthy.

After a time, Blay starts to piece together the fragments of her memory, finds the answers to her questions about herself and her parentage, and learns about the secret under her skin.

May 2006, HarperCollins is coming out with the SEQUEL to this thoughtful, deeply interesting book, so pick this up soon!