Synopsis: Cassandra Leung is a Reckoner trainer-in-training, which means she knows her place — as far less important than the giant beasts she trains, and apt to get benched in disgrace if she screws things up. She’s been given her first job — taking Durga, the genetically engineered five-ton behemoth – part sea turtle, part iguana, all dangerous – into the NeoPacific to the cruise ship on which Durga has imprinted, to oversee the animal as it guards against pirates. Durga is a killer, and Cas has worked hard to handle her. All is well, until Durga becomes ill with nothing she’s ever seen before. Calling home would be only helpful if her mother in the lab had answers – she doesn’t. Cas is on her own, and has known this from the moment her father handed her the EpiTas pill tucked into the collar of her uniform. EpiTas is half of the Spartan phrase E tan e epi tas – “with your shield, or on it.” When the pirates strike, instead of being gunned down with the rest of the crew trying frantically to protect the passengers on the boat, Cas is taken hostage and her suicide pill slapped from her hand. Her job? To train a tiny new replacement for Durga, who died so horribly – and to give the pirates of Santa Elena’s ship a fighting chance to claw their sovereignty from the major corporations who now own the waves and the sea. Despite herself, Cas falls in love with the murderous Reckoner despite herself – and finds the camaraderie of the ship a world away from the lonely world she inhabited. A prisoner held captive has only one duty – but can Cas do her duty? And what exactly, in this case, is it?

Observation: Cas views herself as unimportant – to her family, and to the industry which supplies their livelihood. It’s a little ironic that with all of her resentment she never seems to twig to the fact that she was hand-picked for her abduction, which meant that someone saw her value, even if for the wrong reasons. Readers accustomed to being able to easily determine for whom to root in a narrative will struggle to find their feet in this novel in a good way. Cas is eager and nervous at the novel’s beginning, then morphs into a girl furious, resentful, and — reasonably cowed by the swaggeringly tough Santa Elena and her hand-picked crew. There is literally nothing she can do to save her help herself, and small rebellions are punished with incredible prejudice aboard the Minnow. The captain is slightly deranged and cruel, and Cas herself is no fighter, not really. And yet — somehow she begins to like the crew.

The novel spends little time on the genetic engineering as a science which creates the behemoths with with Cas works, which is unfortunate, as it’s easy to see that her family is fairly well-off for a post-apocalyptic civilization. The story hints at social injustice and political maneuvering which has left populations both vastly rich and vastly poor. There is brief mention that after the waters rose and the country boundary lines changed, some flotsam of former nations were left with no recourse but to come together in gigantic flotilla villages and turn to piracy and salvage in order to survive. Teen readers accustomed to reading critically about social inequality and financial injustice will pick this up. Unfortunately, there’s not much more than a hint and readers may feel a need to fill out the details and help it to make sense. Much is implied and obscured, less is explained, which nevertheless won’t prevent readers from being riveted by the action and tension. 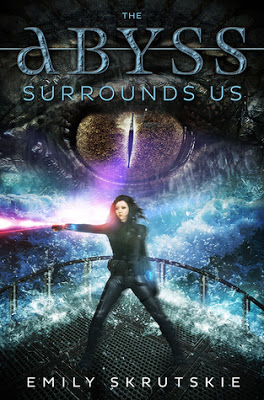 There is a romance — and while no one jumps into lust, which is a nice change from insta-love — it troubles me, as romances rooted in inequality always do. For a change, all parties acknowledge that there can be no relationship when both parties are not on equal footing, however, in the usual blissfully dumb romantic way, choices and sacrifices are still made favoring a relationship. It’s not quite clear to me why, and I guess that’s because for all that I’m intrigued I’m never quite sold on the romance, or on a non-pirate falling in with the cutthroat ways of pirates aboard ship. If the novel had spent more time “before” with Cas in her natural environment, it would have been easier to see what type of person she was, to observe her place in the world, and make sense of why she and piracy would be a good fit, but we have to trust the author for a great deal, which, since the narrative is at times light on detail, is sometimes hard to do. Readers are left wondering at the novel’s conclusion whether Cas has won or not — a clever hook left by the author to reel readers back for the doubtless action-filled sequel.

Conclusion: The first in a planned – and apparently already penned – duology, THE ABYSS SURROUNDS US is a slightly uneven, unsettling, and unexpected book featuring hard-as-titanium lady pirates, a romance which doesn’t quite get off the ground as far as it could, a hardcore series of deep loves and deep betrayals, and a twist at the end. Readers looking for queer fiction with a believable love story will be all in favor; readers in favor of tough girls who draw blood and take no prisoners (except one) will take savage joy in this as well. I’ll be interested to see how the whole thing ends, and what the larger issues of right/wrong turn out to be.

I received my copy of this book courtesy of Flux. After February 8th, you can find THE ABYSS SURROUNDS US by Emily Skrutskie at an online e-tailer, or at a real life, independent bookstore near you!