From the press release: The Children’s Book Council (CBC), Every Child a Reader (ECAR), and the Center for the Book in the Library of Congress (CFB) have announced the appointment of Gene Luen Yang, Printz Award winner and two-time National Book Award finalist, as National Ambassador for Young People’s Literature.

The Kidlitosphere’s own Betsy Bird was part of the selection committee, and having met Gene on a few occasions, I know it couldn’t have happened to a nicer guy. We’re longtime fans, and we’ve featured his books here on Finding Wonderland several times (with a review of his latest, Secret Coders, still upcoming); we’ve hosted him for interviews, too. In honor of his appointment as the 5th Ambassador, here’s a roundup of our posts featuring Gene and his books: 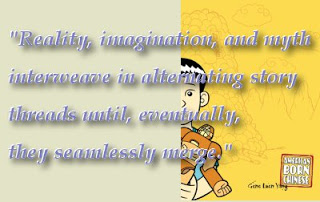