This book is a gem and a gift, and in order to avoid spoilers I’ll say up front: Parker is blind. The dots on the cover are Braille. And now you know …except, it’s not a big secret. Really, Parker would be the first to say, “So? And get over yourself.” It is Parker’s voracious desire to be sure of EVERYTHING in her life – from your reaction to her intelligence – that makes this novel ring so terribly true for me. Tight friendships, believable middle school angst that spills over into high school, and some deep truths which might make you cry – this eminently readable book is that “YA type” that does well and gets the movie deals. You’ll see this story somewhere again.

NB: This novel has a secondary storyline about suicide which isn’t exhaustively dealt with, but it’s there.

Summary: Parker treats her blindness like more of an inconvenience than a disability, her limitations like suggestions, and her friends like the chosen family that they are. Without them, she’d have nothing, now that her father has died. The accident which claimed her sight as a little girl also claimed her mother’s life, and the aunt and uncle and cousins now reluctantly inhabiting her house – and haunting her life – are just strangers preventing her from being who she is. And, her relatives, like the whole load of newcomers to Parker’s high school from the one that closed across town, don’t know The Rules. Don’t take advantage of her blindness, trick or, or treat her like a joke. Don’t help, unless she asks for it. Don’t touch her unexpectedly. Don’t be weird, and treat her like she’s damaged. Don’t expect to EVER be forgiven if you screw up: you get ONE chance. All Parker wants people to understand is that she’s brilliant and capable – that blindness doesn’t change that. But the world has just a long, long way to go – except for a few people. Coach Underhill even thinks she can take her morning jogging habit – a thing she started with her dad years ago – and take on track meets at school. If Parker can get over feeling exposed and find a decent running partner who understands The Rules, it might just work out. Meanwhile, she and her bestie, Sarah, have ridiculous high school romances to sort out and a lot of newbies to inform about The Rules. It’s necessary that everyone learn them. 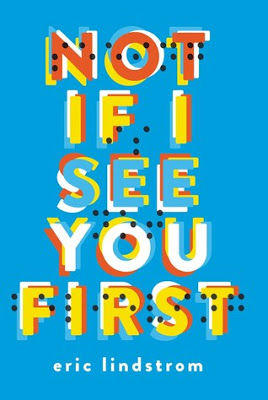 The Rules came to life in junior high after her trust was shattered by someone Parker considered her best friend. To Parker’s horror, she discovers not long after school begins that this …enemy has transferred back to her school. He actually tries to speak to her – and Parker shuts THAT noise down quick – she’s not stupid or forgetful, just blind, all right? But it scares her — and she can’t keep her brain from returning to the hurtful scene over and over and over again. And then Parker discovers that she doesn’t know everything about what happened that terrible day when her friend Scott tricked her — nor does she know all that happened the day that her father died. Finding out is both terrifying, gut-wrenchingly painful and disorienting, as Parker’s True North for a long time has been first her best friends, and next… Parker herself. And Sarah’s acting funny, and as for herself… if she can’t believe in what she doesn’t see – if she no longer can plumb the depths of her own heart – what CAN she believe? The truth has never been harder to see.

Peaks: This is a differently abled person who is a BIG SARDONIC JERK. And she doesn’t do it to be “refreshing” to your perceptions of the differently abled, but thanks for playing. She does it because she’s frankly kind of cynical and disillusioned and afraid to acknowledge that, so yeah snark is easier. I get that. I am that. You might be, too.

The voice in this novel is compelling, sharp, and witty; Parker has a ferociously lively, biting wit — a is a character whose friendships ring true (I want an entire other novel about Molly, Mr. Lindstrom. Just putting that out there). The diverse cast of characters seems to have evolved to surround Parker organically, and even the hapless D.B. fits.

Parker’s insistent belief in the infallibility of her own brain makes the novel’s characterization achingly real life, and makes the out-to-sea-with-no-horizon feeling she suffers when she’s wrong sharply realized – and terrifying to the reader as well. In this poignant and sharply bittersweet novel, you may find yourself and your best friend — ugly cry hard enough to lose all your gold stars for the month – and hopefully be heartened to find that true believers in the gift of friendship, if they hold true to it, receive strength and love reflected back to them a thousandfold.

Valleys: These may be a valley to no one other than me, but I’m cynical enough that my mind struggles with characters in YA novels who are more cinematic than real. Parker is larger than life, and her dialogue reflects a mind that can craft the perfect comeback with 99% accuracy – readers may find themselves wishing to be her, except for That One Thing. Scott is also amazingly good, quite a bit too-good-to-be-true, both as an 8th grader and as a high school sophomore. The drama may be exhausting for some readers, and the situations at Parker’s high school – also larger-than-life, give this novel moments of being a high-stakes, high-emo romance – but fans of John Green and novels of that contemporary type may take to this like catnip for a kittybeast. As always, your mileage may vary. /p>

Conclusion: I snort-laughed, and teared up repeatedly; this novel is full of all the raw, edge-of-the-blade feelings that make a year of high school, intense bravado hiding insecurity, fearlessness hiding abject terror. Less of an issue novel about blindness than a reminder that jumping to conclusions is sucky exercise, the smart-mouth Parker and her cohort provide a roaring start for this debut novelist, and I’m sure we’ll hear more from him soon.

Edited to add: Disability in Kidlit co-founder Kody Keplinger reviewed the book and then and interviewed the author.

Enter to win a copy of this book! You have until November 30th, 2016. Check out the giveaway on Goodreads!I received my copy of this book courtesy of Little, Brown & Co’s Poppy imprint. After December 1 – the first holiday gift to yourself? – you can find NOT IF I SEE YOU FIRST by Eric Lindstrom at an online e-tailer, or at a real life, independent bookstore near you!