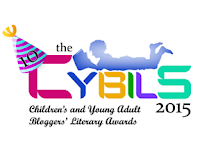 Are yooouuuuuu ready to NOMINATE? …for the Cybils Awards? Nominations are officially open to the public (that means YOU, readers) for ten categories of children’s and young adult books. You have between Oct. 1-15 to nominate your favorite book in each category. So GO! Do it! And if you really want to support Cybils, buy some great official swag with this year’s colorful 10th birthday logo designed by yours truly. 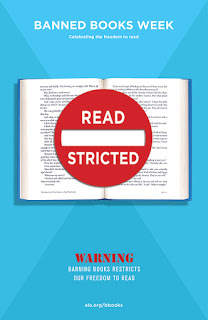 I almost missed the fact that this week is Banned Books Week, during which we can all thank our lucky stars that very, very few books actually make it from challenged to outright banned any more (although I feel like it’s sort of over the top to title one’s article “Banned Books Week is a Crock” in order to make that legitimate point). It sort of feels like saying we don’t need the Voting Rights Act since we don’t have racist prejudice any more. But ANYWAY, enough of my snark. There’s plenty of fun to be had for readers during Banned Books Week, especially for readers who like the annual reminder that we’ve come such a long way, and still might have a little way to go.

For one thing, you can check out the list of 2014’s most challenged books, which includes (yet again) Sherman Alexie’s Absolutely True Diary of a Part-Time Indian (Reasons: anti-family, cultural insensitivity, drugs/alcohol/smoking,
gambling, offensive language, sex education, sexually explicit, unsuited
for age group, violence. Additional reasons: “depictions of bullying”), which I reviewed here. The list also includes two graphic novels: Marjane Satrapi’s wonderful Persepolis and Raina Telgemaier’s Drama (which I think is on my TBR pile from ages ago…oops.)

And, just for fun, check out Powell’s Books’ blog post on 10 Strange Reasons for Banning a Book, pulled from 35 years’ worth of Oregon school and library records. True, the vast majority were not ultimately removed from the school or library in question, but the reasons for challenging the books were…well, let’s just say that 50 Harlequin romances were challenged on the basis that “Teenagers already have trouble with their emotions without being stimulated by poorly written books.”