I am ALL about the mysteries, and it’s kind of all over the board – adult fiction, YA fiction, and now MG. I heard about this mystery series by an American woman raised in England last year from The Book Smugglers, and to be honest, I got tired of waiting for the American version. And, while we’re on the topic, can I rant just a tiny bit about Americanized versions of British books? I deliberately chose the British version of this novel – and do you know why? Because it seems to be The American Way to ruin good British books with a lot of useless word changes, as if American tweens and middle graders are so dull they’ll never pick up on things.

YES. I know it’s a marketing decision. YES, I know they’re trying to make the words go down easily like overly-sugared soda so the American kids will want to buy the books. And while I do understand that there would be some things that an American child would not immediately understand — squashed fly buns comes to mind – I think we make mistakes in lowering comprehension expectations that the child cannot learn to read in context, or that it’s a negative when they’re a little challenged by an unfamiliar word in a good book. Do we really expect them to fling the book away in disdain if they don’t know what squashed fly buns are? Seriously? Will it completely damage their self-esteem, leading them to never read another British book in their lives? And while we’re on the soapbox, WHY must they change the titles? Do American children really struggle so much with compound words such as “unladylike?” Is it a conceptual struggle? Because MURDER IS BAD MANNERS, which is the clunky American title, is really not as zingy as this one, which plays off of the deliciously Shakespearean (Hamlet) phrase, “Murder most foul.” American children, is the common conception, don’t know the classics, and wouldn’t appreciate that, I guess. Of course, if no one ever has high expectations for them, of course they won’t live up to them. 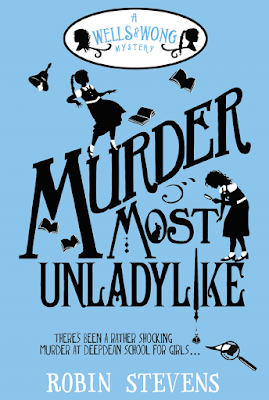 Summary: Hazel Wong is thirteen, spotty, lumpy, and utterly out of place at the Deepdean School for Girls in England. Oh, sure – she’s a girl, but as far as her classmates are concerned, she’s the child of an opium-smuggling drug lord from The Far East, which is clearly a mystical, magical place where the girls all lay about on purple cushions and paint and draw — and smuggle opium, obviously. It’s not easy being the lone Asian girl – and child of an Anglophile Chinese father – in Actual England, and it’s harder still being the best friend – most of the time – of a real English girl, Daisy Wells, whose sunny, bubbly, take-charge personality means she’s never wrong, she refuses to be questioned, and she never lets Hazel have her say. She doesn’t have to — after all, it’s DAISY who is the President of their super-secret detective agency – Hazel is only the Secretary, after all. When Hazel finds an Actual Dead Body, Daisy is all set to investigate the heck out of things – only Hazel is sure she’s wrong about most everything. The girls sneak about, investigate, and find that things are never truly what they seem – especially not at Deepdean School.

Peaks: There’s a lot to love about this book – boarding school hijinks, which is a huge plus for those of us who love our School Stories; unique characterizations, a sense of place, a very neat little notebook which reminded me fondly of Harriet the Spy’s, and a lot of new things per page – things which were unfamiliar and therefore intriguing. This book is a real mystery – readers will likely not find themselves with all the clues before our junior detectives because the facts are simply laid out in the story — and we are so far into the mind of Hazel and disagreeing with Daisy’s determined theories that things are easily missed. This is all to the good, as it’s fun to figure things out with the detectives.

There is so much tension in this narrative as well – because Hazel is dealing with racism of the daily sort – microaggressions that chafe like fiberglass cuts against her bewildered heart – she doesn’t know how to deal with the girls who insist that her father is an opium smuggler (he’s a banker) who call her “foreign girl” and play mean pranks (one of the staff speaks loudly and slowly to her, as if she is hard of hearing), who make snide remarks and then excuse themselves with a perfunctory “Sorry.” Over and above the whole “people are dying and no one seems to notice” thing, is far and away the most conflict-producing part of the novel for me. I wanted to at times both snatch Daisy bald and give meek and compliant – but inwardly raging – Hazel a little shake and force her to speak up/stand up for herself. I am eager to see how she deals with being treated as Other, as the series progresses – even if there were no more random deaths, it would be worth the price of admission to see whether this friendship actually becomes real and holds together. 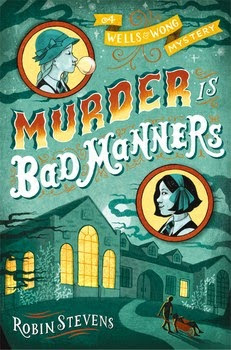 Concerns: This book is allegedly middle-grade, but it is a murder mystery; there is blood. Some adults may find the nature of the murders gruesome, or find the identity of the responsible party disturbing. While I did not have that issue, I am not pre-reading for middle graders (I think plenty of YA readers will enjoy this as well, incidentally). The descriptions will not, I think, upset even queasy young readers, and I think that most will appreciate that this was a real wrong done.

Conclusion: With its classy British cover (in the American one, Hazel’s hair is wrong. Has anyone ever tried to put a bob “up?” And she is decidedly unfashionable – why the attempt to make her stylish and Daisy a bubblegum-chewing American looking girl? It was 1935… I thing GUM Is Bad Manners might have been a more suitable title. *sigh*), snappy title and absolutely smashing story, this mystery is perfect for a chilly, damp morning with loads of tea and a snuggly blanket.

I bought my copy of this book. After April 21, you can find MURDER MOST UNLADYLIKE or MURDER IS BAD MANNERS (under the second title) by Robin Stevens at an online e-tailer, or at a real life, independent bookstore near you!