Yes, I am the big nerd who occasionally has themed bookshelves. In my house.
Because, apparently I am a pretend librarian.

Happy Friday, kids! I’m here because I’m procrastinating. Knowing that, I’m going to keep this short… but I did want to pop in today and say hello. AF and I quietly celebrated ten years here on our blog this month, and both of us are a little sad because we pathetically are overbooked and can’t really do much about it. Oh, well! Throw some confetti for us.

♦ Let’s kick off this blitzkrieg of links and nonsense with a bit of BOOK NERDDOM, as Mother Reader wins 2015 (thus far, anyway) by being included in the mental_floss List Show broadcast of Weird Awards. Yes, and she will now be known as the “weird ass picture book lady” for-ev-ah. I also love that there’s a nerdfighter touch to this whole thing, too. Cheers, Pam!

♦ It’s been a quiet week here in Lake… um, at the Treehouse, anyway. We finished out the Cybils in triumph – and then kind of collapsed (did you read Pam ; we dispatched a few questions to a KidLitCon blogger we’ll be featuring in the next week or so on the blog; we selected – and then rejected – two books for a tandem read – we’re still looking, but the books we keep choosing either both of us have already read, so it wouldn’t be an actual tandem READ, or only one of us has access to them – etc. There’s a science to this thing, apparently.

♦ This week has been a good one for deep thoughts, as Malinda Lo’s four-part critique of …critique – or, book reviewing raised some good thoughts and questions in our WritingYA writing group about how the historical imbalance of voice and power in the U.S. has influenced the voices speaking about what a book is and should be. (Even with its eye-roll invoking title, TheHorn Book blog raised the topic up and carried it to perhaps a new audience with some in-depth conversation as well.) If you haven’t made time to read this whole essay, do. One of the things we appreciate about Malinda is that she articulates things that few other people are talking about as coherently and completely. This is a thorough and well thought out essay.

On the flip side of Malinda’s piece, though, was a recent review in Kirkus… a troubling review wherein a reviewer tried to explain why a book was panned, and used their platform as critic to shake a finger at authors and say, “Let’s all play inclusively now.” In the interests of full disclosure, in my book reviews, I will note when a cast of characters is entirely dominant culture, but first, I don’t use that consideration to completely discount a book, and second, I don’t consider this blog “professional” space, and neither do I have the scope and audience of Kirkus, obviously. In a blog attached to a national magazine, this awkward, grossly oversimplified blow felt …convenient, and so unnecessarily slighting to the author. It seems to us a more positive move is to simply highlight OTHER books out there doing the better job of being inclusive, rather than to shake a finger and pan a book for what it’s not – and what it never claimed to be. We’re just not sure this is the right direction for book reviewing either… it’s as if someone heard about inclusiveness in reviewing, but didn’t actually understand it… 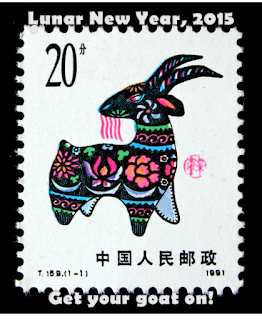 ♦ It’s the year of the Goat… or the sheep, or the ram, depending on where you are in various Asian countries. I love the whole goat thing, as I’ve said before, because I am rather fond of the animal, so here’s to a year that will eat anything, jump on anything, occasionally faint, and keep us hoppin’. One of the things I miss from living in Scotland was the Lunar New Year celebrations – the Scots are ready to celebrate ANYTHING in this dreich and cold time of year, and they’re ALL about the fireworks, so there were plenty of parades in Glasgow and fireworks and sales at the big Asian groceries. Good times.

♦ Been talking with various people about Black History Month, and what it means to honor that when you’re not in school anymore. Some people want to dress as something, because cosplay makes the world go ’round. Rather than donning my nonexistent Ghanian outfit (and let’s not say “African outfit,” because, all together now, “Africa is a continent, not a country“), I’m puttin’ on my kickers today in honor of Bass Reeves, as highlighted in BAD NEWS FOR OUTLAWS by Vonda Micheaux Nelson and THE LEGEND OF BASS REEVES: Being the True and Fictional Account of the Most Valiant Marshal in the West,by Gary Paulsen. For me, “observing” Black History or Women’s History or Asian/Pacific American Heritage month is simply trying to find out something new about some historical person, every day. I also learned about Dr. Pauli Murray this month – who was both a lawyer, a priest and was nominated as an Episcopalian saint. (Seriously, I need to work up an outfit for her!!!)

♦ Didja know Gwenda – recently honored with a STARRED REVIEW from Kirkus for LOIS LANE: FALLOUT, her newest book – has a fancy new website? She does.

♦ Checking in with The Brown Bookshelf’s 28 Days Later this month has been to happily – and in some cases, ruefully – discover many books and authors I’d never heard of, including C. Taylor Butler and Jesmyn Ward. The Cooperative Children’s Book Center just released new statistics that most of us have seen – relating that the number of books for children and teens including African and African American people of color has increased fairly dramatically in the last two years. That’s certainly not hard to believe – we’ve been preaching to the choir long enough for the news to get out beyond the congregation. We’ve not reached any sort of ethnic parity yet – books for Latino and Asian kids haven’t shifted much at all – but it’s nice to see a step in a positive direction.

♦ I love Laurie Halse Anderson. I seriously love Buzzfeed (though it’s kind of The Website Black Hole Timewater, but whatevs). The two together are a match made.

♦ Aaaaaaand, speaking of Black Hole Timewasters, this day is not going to organize itself. Cheers, and have a good one.