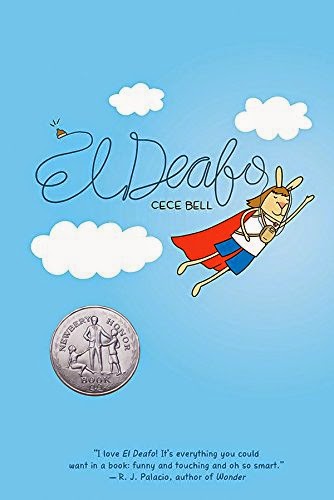 Summary: Before writing up this post, I honestly didn’t realize that El Deafo by Cece Bell had won the 2015 Newbery Award. Well, now it’s also won a Cybils Award for 2014, in the Elementary and Middle Grade Graphic Novels category! And I’m thrilled that I got to be a Round 2 judge this year for Graphic Novels, because I got to read so many of last year’s fantastic works of comic literature.

Anyway, clearly I was not influenced by the fact that this book won the Newbery, since I found that out well after we made our choices, but obviously this one is a standout. A memoir of the author’s elementary school years learning to cope with a hearing impairment as well as the other tribulations of being a kid, this one became an immediate favorite for me as soon as I started reading.

Peaks: As I just mentioned, one of the strengths of this book is the fact that it’s a funny story about an endearing character going through all of the classic problems of childhood, plus a few unexpected challenges because she is hearing impaired, but none of these daunt Cece’s ongoing optimism, resilience, wit, humor, or doggedness. That image in itself is one that any child with a disability very much needs, and those without disabilities also need to see, to show how other people’s reactions come across and to emphasize that they are fully-rounded people—they are not simply a disability.

Cece’s youthful experiences and misadventures will be relatable not just by kids with hearing loss but all kids, as she runs up against the classic problems caused by being the new girl in class, getting a crush on a boy, and dealing with the sometimes-fickle friendships of grade school. Her fantasies of herself as superhero El Deafo–her giant Phonic Ear hearing aid giving her amazing super-hearing powers–are hilarious and also relatable.

I loved the graphic storytelling. It was cute, and also impish, the characters rendered as humanlike rabbits (reminding me of how Matt Groening’s Life in Hell characters were mostly rabbits…but more PG, I suppose). Appealing, colorful, and funny.

Valleys: I honestly didn’t have any criticisms about the book itself. But–and this could be just me–I can’t get past the idea that adults might hand this to kids for didactic purposes only, rather than because it’s a funny story about a kid their age who just happens to be deaf. I would hate for that to ever be the case because it just such a great book all around. I guess the upshot is, whether kids pick this up on their own or because they are “supposed to” read it, I see it as having that critical combination of kid appeal and literary merit that will make it both a memorable and enjoyable read.

Conclusion: As I’ve mentioned in previous posts, when I make notes about Cybils finalist titles, I use a numerical rating system which is there to help me weigh each book on its own merits according to the Cybils criteria. It helps me zero in on which titles have just the right combination of traits, so that I can try to put any personal biases or preferences aside to focus on what would make the best CYBILS title and not just my own favorite. This one was one of my favorites AND it scored the highest on my rating system for the E/MG graphic novel finalists.

If you loved it as much as I did, you can find out more about the book and the author (who is married to the equally talented and hilarious Tom Angleberger, aka Sam Riddleburger) on her website and follow her on Twitter @CeceBellBooks. Also, don’t miss the fab interview from 2008 by the 7-Imps.

I received my copy of this book courtesy of my library. You can find EL DEAFO by Cece Bell at an online e-tailer, or at a real life, independent bookstore near you!