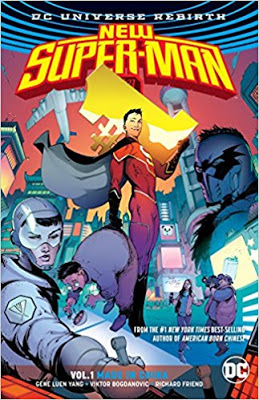 Synopsis: Reboots seem to be the story fad du jour when it comes to comic franchises, and while there have been some reboots of Superman, I doubt you’ve seen one like this before. Brought to you by the writing talents of our own local NorCal comics genius Gene Luen Yang, along with illustrator Viktor Bogdanovic, one of this year’s Cybils finalists for Young Adult Graphic Novels was New Super-Man Vol. 1: Made in China.

This “DC Universe Rebirth,” as DC is calling it, posits a brand-new origin story for your rebooted Superman, one steeped in DC universe lore as well as more recent traditions in Chinese comics. This time, the would-be Superman starts off as a blustering teenage bully from Shanghai named Kong Kenan. After accidentally saving his own bullying victim from a marauding supervillain, Kenan attracts the eye of a super-secret group trying to build a homegrown Chinese Justice League—they need a Superman, and they think Kenan’s perfect for the part. Kenan is stoked: he has fancy powers and his new friends include Chinese Wonder Woman. What could possibly go wrong?

Observations: This is a really fun, international/multicultural take on the Superman comic adventures—kudos for diversity and for introducing new characters and storylines to a classic (some might even say old-fashioned) franchise. And, of course, Gene Yang’s writing is always stellar, so this one has a good balance of entertainment and deeper themes, such as politics, family, and, naturally, good vs. evil. Readers will catch a glimpse of some ongoing sociopolitical issues in China through the lens of popular culture—both shared pop culture AND some stuff that will be new to readers, such as some homegrown Chinese superheroes that are not too thrilled with this new Justice League homing in on their crime-fighting turf. 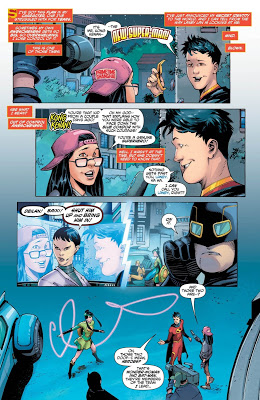 Not every reader is into superheroes, but those who are will surely enjoy this one. Effort has been put into making Kenan a relatable teen character with regular human storylines, while still packing the story with superhero adventure and humor. That extends to the artwork, too, which was well done: solid and not overly exaggerated superhero-style character design, good flow to the layout, and fast, exciting storytelling.

Conclusion: Pushing diversity to the forefront of comics makes some stodgy grouches go a little nuts, but personally, I’d rather read this new take over the old chestnut. Sorry, dudes. More variety in stories is always good. And I think this one is also being marketed in China, which is, I hope, a success.

I received my copy of this book specifically for the Cybils, courtesy of the publisher. You can find NEW SUPER-MAN VOL. 1: MADE IN CHINA by Gene Yang and Viktor Bogdanovic at an online e-tailer, or at a real life, independent bookstore near you!