If you do a search on “South Asian Steampunk,” you get pictures of some fab cosplay, but buptkus on books. (I actually found a good article on the inherent problems of “Asian steampunk,” though, so score, but no cigar on the books…) Seeing a cover depicting a South Asian girl on a SFF book on NetGalley meant I was immediately intrigued. I am familiar with the author through Cybils nominations (incidentally, it’s time to GET ON THAT), and it was good to see her strike out in another direction. I don’t think she was entirely successful on the diversity level – for reasons I’ll get into later — but I enjoyed the story and am looking forward to continuing with the series. (The novels are listed backwards, and the trilogy begins with THIRD DAUGHTER, published last year, and finishes up with FIRST DAUGHTER, published last month.) It’s written for YA but would work for older MG and crossed over to adults.
Summary:The third daughter of the Queen of Dharia is anxious for her eighteenth birthday. If she can just make it to that point, she’ll have her legal majority and be able to choose to do what she wants which is marry for love, and leave the cloistered palace life for the country of Samir, to seek out the conspiracy which killed her father the queen’s Consort, and left her heartbroken and fatherless these long years. Aniri feels like she’s the only one who cares, and fortunately, the courtesan and fencing instructor, Devesh, cares about her. At eighteen, she’ll declare herself, marry him, and together, they will go and avenge her father’s death.

Of course, everything we plan doesn’t have the universe’s stamp of approval. Aniri’s plans change, almost immediately. First, there’s a betrothal with a barbarian kingdom of Jungali in the offering. Second, for once, her mother has a job for her – a real job, like she’d give one of her older sisters. And third… well, feelings. Aniri is, for once, touched by the plight of someone else. Prince Ashoka — Ash — might really need her. Aniri’s self-centered, reckless, headstrong princess schtick begins to seem a little less important… but, just a little. Eventually, there are raised stakes, tensions, swordfights and open-air battles. Also dirigibles. Though it stands alone, having told a complete tale, the novel concludes only with an MHEA – that is, a “mostly” happily ever after – and a perfect lead-in to the sequel. 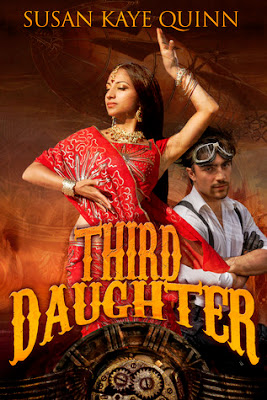 Peaks: I’ll limit my squee, so as not to cause spoilers. This novel has shades of GIRL OF FIRE AND THORNS, a slowly developing romance, missteps, heartbreak, betrayal, and hand-to-hand combat. The cover copy says some nonsense about “steampunk-goes-to-Bollywood” which causes me both to smile and wrinkle my nose; MANY things are beyond Bollywood. This has nothing to do with dancing and singing, traditional South Asian or otherwise, so let’s move along.

I like the cover – the red is so striking. I’m less sure about the dude with the goggles, as he doesn’t quite look like he belongs… he’s definitely not South Asian. What does a man from Jungali look like? Dunno. More on that later.

Dharia and Jungali are both diverse cities patterned after an imaginary South Asia before or during the Raj. We so rarely see India depicted in steampunk, so this was a fun find. I liked the action — the immersive narrative — and the cast of characters that started out with sort of a wide view, and then narrowed to three or four central characters. The plot was wielded with a lot of skill, and this familiar trope of “spoiled princess” got a new twist. This was a fast-paced book and a lot of fun.

Valleys: Aniri isn’t always the leader of her own story – at times I found her really buffeted along by circumstances, but eventually she found her feet and rallied. I look forward to watching her grow further. Otherwise, I found only the tiniest drawback to this marvelous tale, and it’s also one of its greatest strengths – it’s worldbuilding and descriptions. For some, there might be too much description of dirigibles; for others, not enough – depends on who you are. Likewise, in terms of worldbuilding, for me, there was both too much and too little imaginary South Asian-ness. At times, the South Asia was so imaginary that it moves out of focus. Dharia and its culture is depicted a little hazily — since it’s steampunk, there are corsets and dirigibles, yes? Victoriana. However, despite descriptions of what must be a traditional sari, mehndi, classical dances and other details of South Asia, they were incompletely described. As another reviewer has noted, the corsets had names, the sari, as a garment, did not.

This vagueness extended to Jungali. We knew that it was cold and mountainous, but not much else about how it was different, in terms of being a mirror of another familiar country and culture. This was because we didn’t get much more than a sketch of their country, other than to know that the people were poor. This man indeed be simply a case of reader greed, which is satisfied by ensuing books (the next of which is set elsewhere), but I wanted to meet the court, know what wealthy Jungalians wore, how they acted, the names of their money, their gods, their jewelry and clothing and rituals — I wanted to feel that culture, too – it wasn’t quite as distinct as Imaginary India. However, these are TINY concerns, which in no way detracted from the rip-roaring romance of the spy v. spy, girl-on-a-wire-dangling, dangerous adventure going on. So, read and enjoy it.
Conclusion:

I received my copy of this book courtesy of the publisher. You can find THIRD DAUGHTER by SUSAN KAYE QUINN at an online e-tailer, or at a real life, independent bookstore near you!