Despite the fact that we’re big fans of graphics here in the Wonderland treehouse, I generally leave the book-talking of said graphics to Aquafortis. For because: she’s an artist. I doodle. I haven’t got a clear set of parameters on what makes a graphic novel good – I just like some stuff… and don’t like some other stuff. Realizing that’s my shtick for all books I read all the time anyway has freed me to talk about this one: CEMETERY GIRL: The Pretenders graphic novel, multiple authors, first in a trilogy.

Concerning Character: Calexa Rose Dunhill has a fancy name, and a complete lack of identity. The first frames of the novel show us that someone a.) tossed her out of a trunk b.) into a cemetery where she c.) rolled downhill and hit her head on a tree, and lay in front of a huge stone with the name “Calexa” on it for awhile. She has borrowed her name, stolen her sustenance, her home, and her clothes. She’s a teen – of some age – living in the cemetery, inside a mausoleum. There’s a caretaker, mean but ultimately helpful – he tends to be lax on locking up his kitchen – and just up the street is an elderly woman – also conveniently lax about locking her house. Outside the cemetery gates – and sometimes inside are generically Bad Teens – drag racing, partying, and conducting séances – as one does. While the plot has a slight ring of familiarity, its denizens are not quite as jarring as in THE GRAVEYARD BOOK, but then, Calexa’s life within this graveyard lacks that insouciant charm. There are no helpful spirits — the fact that she sees spirits is a little creepy. Then, she sees something worse – a murder. And, now she and the dearly departed are up close and personal… 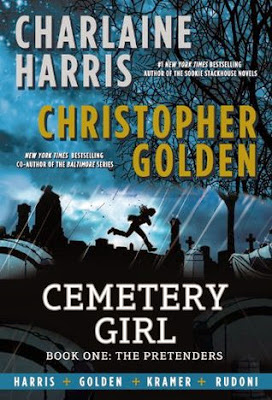 Critical Reader Reaction: There was a lot to love about this first book in the Cemetery Girl series. Sometimes graphic novels are PERFECT for what they have – rich, deep color palette, glossy pages, lots of detail — I loved the names and dates on the gravestones; I admit to a little nerdery of actually enjoying cemeteries, so it was like poking around through the Dunhill while concurrently lying down, which equaled Good Times for my post-digging-in-the-garden muscles, of course.

I do have some complaints about this book, however. While I’ll allow that this is the first in a trilogy, the plot has some significant holes. I had immediate questions about motivation from the first time The Bad Guys are encountered. They are Bad Guys of the Bwa-hahaha/Stroking Persian cat/Wearing Evil Goth Black clichéd brand of villain. They want to be big – but, bigger than what? Stand big and strong against what? The ringleader seems to want this ineffable power – but it’s clear and becomes more clear than within her circle, she is powerful, and her circle itself is well-connected within school and community. So, what do they want? What’s all this about?

Also, the murder raised some issues with me – probably because I’m a ghoul – but, bodies are pretty tough. If you’re depicting a skinny little Goth stabbing someone in the heart? Newsflash: people have ribs. More force would have needed to be shown, leading to a MUCH bigger mess, and much, much more dismay, as everyone is included via spray. At the time of the murder, neither the dialogue nor the art conveys anyone’s real horror — there’s a moment of surprise, an “Oh, noes, you shouldn’t have done that!” second, …and then everyone …goes home. People aren’t that lock-stepped about what color a red light is, so I had a hard time believing cheerful complicity of a group of teens for a murder, especially when from the first time we encounter them, it’s CLEAR that we don’t know what they’re after, or why – only the ringleader seems to know. The rest of them are two-legged muppets with her hand up their, eh, shirts. *cough* I know about peer pressure, but I just don’t believe that teens would just… go along with murder to go along. Maybe I don’t read enough horror to get a good feel for this.

Also, and this one is a big one? I don’t know why the person with THE KEY TO THE WHOLE THING has to make such a big DEAL out of finally getting around to telling anyone the truth. Calexa has the equivalent of ONE LINE here, one line… and she… decides to do some macrame or something before delivering it. I recognize we’re supposed to think that the main character is afraid, but seeing her wrestle with this would have been better than telling us… well, anything. If her fear caused her to briefly lose her conscience and her humanity we need to see that. Viscerally. Graphically, as it were.

Because Calexa’s story is being told from the single point of narrative that is her disjointed, rambling thoughts, there’s very little sense of discovery. YES, she has some sort of traumatic amnesia, so we don’t get a sense of her — but though we spend a lot of time with her, we have less of a sense of her memories, which begin to return during the novel… but which explain nada. And, so the reader is left to ponder frivolous things, like where the heck is she going to the bathroom? Does she steal a hairbrush and a toothbrush? Tampons?! Because the artwork has to do 3/4 of the work in a graphic, there needed to be much, MUCH more detail to help us really see Calexa. In terms of the writers, I found myself wondering why Calexa never went to a library. Did they not have libraries in her neck of the woods? There were so many ways in which she could have helped herself – free, inconspicuous ways which runaways use all the time – but she seemed clueless not just about being who she was, but about how to order her world.

And, yet: she knew that she knew Latin…?

While the artwork was, in some panels, just gorgeous, it’s really inconsistent — especially — regrettably — with the murder victim. She appears both Latino and African American – and while she could indeed be rich in culture and be both, at times her appearance really fluctuated. She also looked enough like the Bad Guys as to confuse things. Cemetery Girl is mostly identifiable by her clothing; at times her expressions seem like she’s being drawn by more than one person.

While this is a somewhat uneven, ragged start for the trilogy, I think rabid fans of Golden and Harris and newbie spec fic graphic novel fans will be able to take the problems in stride with a grain of salt, and give it a shot. In all likelihood, the next episode will have found its feet a little better. If you’ve a tendency to want ALLLL the story before you read, wait — this was a fairly short read, and you’ll be cranky waiting for the next installment, as so many are!

I borrowed a library copy of this book. You can find THE PRETENDERS: #1 in the CEMETERY GIRL TRILOGY by Christopher Golden & Charlaine Harris online, or at an independent bookstore near you!