Synopsis: After the Melt, nothing is the same as it was, though Frenchie has heard stories. Epidemic disease, flooding, earthquakes and other disasters rage and the natural world is wildly out of balance. And then, the madness takes hold, as people lose the capacity to dream. In tribal communities, whispers of “Recruiters” surface. It seems that, together with the Church, the world has discovered a cure for the hopelessness and madness, and a way to save themselves. As always, this salvation comes through the blood of sacrifice – but only the sacrifice of some. The indigenous people in North America have not been touched by the chaos in the larger world. Their communities remain …sane, and in the marrow of the indigenous peoples has been discovered to be a cure. “Recruited” into “helping” to save the world, indigenous people are being forced into residential housing and robbed of their bone marrow. It saves those unable to dream – and decimates the tribal populations.

With his father gone, his mother abandoning him and his brother lost to him, Frenchie at sixteen is shattered, heartsick, desperate and ill. Feverish and self-destructing, he stumbles on two other Elders and a passel of little kids also seeking their loved ones and trying to make some sort of a family and a home on the run. Wary and hopeful, he falls in with their pack, and begins to lose his heart to this band of survivors – and to make room in his heart for real love. Survival, however, can wear a person to the bone, and then disaster, which is always so close, strikes. In their quest to regain what they’ve lost, Frenchie and his team find what they weren’t expecting — in loss, promise, in conviction, re-connection. Through disaster and rebuilding, they learn that the things we love we truly never let go. 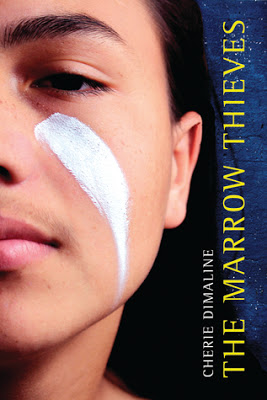 Observations: Every time I hear people telling me that post-apocalyptic fiction or dystopia is dead, I find a book in which there is a new and clever way of fleshing out what could be a stale and weary literary device. The author doesn’t just plug North American indigenous tribes into a trite formula, however, but deeply weaves truth and metaphor into a conflicting and revealing story.

That the world ends badly and everything goes to hell is, of course, the basis of a post-apocalyptic novel, but too often speculative fiction then retreats into a story of mostly white females escaping from zombies or something. I especially appreciated this book because a.) there is a family here, with the sacred love between siblings that allows them to sacrifice for each other, b.) the story has nonwhite allies who have put their sweat and blood into saving people, and thus does not further the white savior narrative, c.) there is love of all kinds, and in fact that love story rises above the darkness and desperation of familiar losses and desperation. The disaster-and-survival aspect of the post-apocalyptic narrative is another place where the book is different… despite the impacts of global warming, earthquakes, and floods, the survivors don’t seem unable to face the task. Not that living rough as an ‘Apocalyptic Boy Scout’ is anything but wearying and at times, dangerous; not that people don’t sometimes greet a bed in an abandoned hotel with the greatest of joy. It’s that these characters have their Elders and stories of the past on which to draw courage and techniques to survive. They each take up their burden – with only minimal outbursts of the unfairness of it all – and they get on with their true task, which is to rescue their lost ones, and recover their families again.

Bone marrow is the spongy tissue inside our bones, which, in newborn babies, produces new marrow cells, or stem cells. By young adulthood, the marrow inside the bones of the hands, feet, arms, and legs stop producing new marrow cells, and active marrow remains only in the spine, hip and shoulder bones, ribs, breastbone, and skull. All bone marrow produces blood cells, called red blood cells, platelets, and white blood cells – the things which are key to life, growth, and our survival, by which we fight off disease. When the “Recruiters” come to steal the marrow from the indigenous people in the book, this echoes the metaphor of what was done in American and Canadian history to indigenous children in the Westernizing residential schools. In taking their freedom and their language, their cultural health was being stolen in return for emptiness and death.

Conclusion: There is an exquisitely painful irony in the idea that marrow is what cures society of its inability to dream, and that they are taking the marrow from the indigenous peoples in the story. Despite the metaphor and shifting layers of depth and meaning, this is still an active story with a heart – at turns grim and painful, brutal and inevitable, and in other moments, tender and careful, hopeful and beautiful. It is not a fast-paced adventure, and this is not a book you will be able to skim through and put away. It draws readers in and they may find they care deeply about the wisdom and sacrifice of Minerva; about Miig and the memories he holds around his neck, a pouch full of glass shards and lost hope; about Rose and her round cheeks and flinty will; about Frenchie, and his longing for something – safety, maybe, freedom, and hope. This book will likely resonate with readers who enjoyed Walter Dean Myers’ post-apocalyptic novel ON A CLEAR DAY, Patrick Ness’ THE KNIFE OF NEVER LETTING GO, Moira Young’s BLOOD RED ROAD, or Ann Aguire’s ENCLAVE series.

I received my copy of this book courtesy of the publisher. You can find THE MARROW THIEVES by Cherie Dimaline at an online e-tailer, or at a real life, independent bookstore near you!