Synopsis: The Oresteia are the river – they’ve never been anything or done anything but skim up and back, hauling and freight throughout Riverlands as is their fate, through the auspices of their god. A fair bit of smuggling happens up and down the river, too, but the god stays mum, the wherries are sturdy, and there’s always extra space for whatever, right? It’s a free and easy life, freight-hauling, smuggling, and knowing the other wherrying families moving through the waterways. Caro was sure this was her fate, too, but the god never speaks to her – she’s of age and past it, but even though she trolls her fingers into the water and listens hard, she never…quite…hears. It is the private heartbreak of her life, to be calling and calling, and never answered. And then, on a day when too many other of the wherry families have lost their barges due to a terrifying act of piracy, Caro’s father is arrested. Smuggling’s the charge, but it’s mainly for refusing to ferry goods for soldiers. What’s IN that ridiculous crate, anyway? To spare his life and commute his sentence, Caro agrees to carry the box without her Da — only to realize she’s being pursued, first by a mysterious fast cutter, and then, by every two-bit pirate and murderous dog in Riverlands. The smooth-talking courier who claims to know everything is obviously not telling her the truth. If only Caro knew which way she was supposed to go!

Politics, treachery, and lies are also in the churning waves – as well as gods and monsters. As Caro immerses herself in the current, a steadying hand on the tiller, she has to navigate these waters safely, or more than just her life and her father’s life will come to an end.

Observations: Readers who enjoy fast-paced adventures with a whiff of politics will like this one. There’s no overwhelming feeling of danger, as the plot twists aren’t hidden, but easily discerned. This reads more as a safe adventure, in which the reader can be carried along without anxiety, knowing that, even though there are a few unexpected splashes along the way, the river runs true. 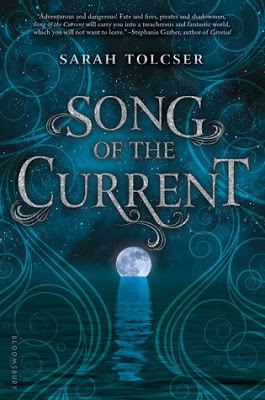 The idea of gods and them speaking is not often encountered YA lit, and this book contains an interesting exploration of this. Many readers will find the idea of life-guaidance via water entity an intriguing one. Readers who enjoy books which tell a simple story, and reveal a simple truth may find themselves drawn to the characters in this novel. Mistaken – or hidden – identity is often a fun trope, and though the way in which it is used in this novel is as familiar as a song, and readers will likely see it coming, it is nonetheless still fun. Who we are, and where we belong is something which can be determined ONLY BY US, and many teen novels, with their emphasis on the herd’s decisions or parental input, can miss this. As teens, we spend a lot of time hoping this is true, and not sure we believe it, but this novel verifies: there is a place for us, and only we can find it, defying what our mothers are, or what our fathers say, there is a way forward for just US… if we have the courage to take the wheel and sail that cutter into the sunset.

Conclusion:Readers who enjoyed girls-on-the-sea books like HEIDI HEILIG’s THE GIRL FROM EVERYWHERE duology, or Emily Skrutske’s ABYSS duo will enjoy this story of a lively sailor girl who wants to be the terror of the high seas… eventually. Once she figures out to whom she belongs, and where. There’s a bit of sailing jargon, which might produce a learning curve, and there’s tons of travel, but the book is supplied with a map, so the intrepid reader shouldn’t lose their way.

I received my copy of this book courtesy of the public library. You can find SONG OF THE CURRENT by Sarah Tolscer at an online e-tailer, or at a real life, independent bookstore near you!