As a panelist for Cybils YA Speculative Fiction, Round 1, I’m going to be briefly writing up some of the hundreds of book I read as part of the award. As panelist conclusions are not for public consumption, the purpose of these write-ups is to keep track of what I’m reading, and will mostly touch on plot synopsis, with minimal comments on thematic tropes.

Synopsis: Eugenia “Genie” Lo – one of way too many Eugenias of her generation – has always been a bit of a firebrand. Unlike her fashionable friend Yunie – another Chinese Eugenia – Genie finds her center in her homework – which she does routinely, expertly and superbly – and in ignoring her mother’s ranting, which she also does like a boss, because her mother is always screaming about something. A Bay Area kid living in the SiliValley, she also bitterly acknowledges that she’s just like most of the hordes of teens living in the land asphalt, parking lots, bubble tea shops and strip mall nail salons: she’s an education junkie. She’s high-achieving. She’s Asian. She’s desperate to get out of the reach of her mother’s voice, and into A Good School. Princeton, for preference, or even Harvard. So, when this weird new guy at school scopes her out and says, “You belong to me…?” Oh, nu-uh. Nope. Not in this lifetime. Genie Lo has way too many other plans – mainly to work on not being just like her father and to get the heck out of dodge. 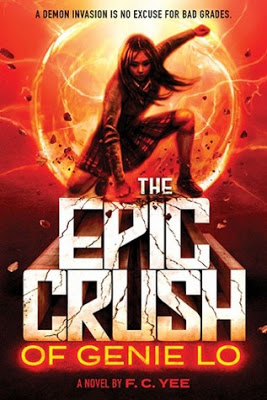 But Quentin Sun – new guy – is not prepared to leave Genie alone, and soon, Genie realizes she needs him – and not just because he’s ridiculously good looking. Quentin is all Genie has to teach her what she needs to know to save the world… and soon it’s time to school herself on perfecting a whole new set of skills — those of demon fighting. Genie’s pretty sure she can’t do it, but Quentin Sun is only an international transfer student in Earth’s realm… in the Heavenly Realm of the Jade Emperor, he’s the Monkey King, down to the love of peaches and the fuzzy tail. …And Genie? Well, she’s a reincarnated sidekick of his. Quentin’s convinced that he and Genie’s shared power will be enough to answer the rash of demon incursions on Earth – and into the Bay Area. They’re terrifyingly strong and flesh-eating, and it’s crucial Genie gets on board with the plan before more people – human people on the earth plane – are brutally murdered and eaten. But, what about being on track for an Ivy League? What about all of her plans? Right now, Genie’s got a lot of studying to do – about everything, including the world as she once believed it to be – and there’s not enough time…

Observations: Many YA readers were first introduced to this oldest and greatest of Chinese fables, the story of the Monkey King, in Gene Luen Yang’s AMERICAN BORN CHINESE. The adventures of the Monkey King in that book are myriad and surreal. Author F.C. Yee renders these same surreal battles between “the good guys” and the demons through the eyes of one of the newest good guys – a sarcastic, short-tempered California teen who just wants to get on with things so she can polish up her college entry essays and go back to crushing her opponents on the volleyball court.

Readers seeking the trope of the “strong female character” will find a lot more than they bargained for here. Genie is strong both physically and mentally, and by meeting these characters from Chinese myth, she is learning to be strong spiritually. There is a lot of humor and snark which will appeal to many teens, and a lot of exploration of the various roles of Bodhisattva, gods, and monsters in the Buddhist pantheon, which also makes this an unique foray into the mythological and folktale history of Chinese literature.

Conclusion: This novel is written cinematically, in that readers may be able to envision each chapter as a television episode along the lines of THE MIDDLEMAN or a comic book. The colorful descriptions and sharp-edged snark combined with completely surreal demons and monsters make this a fast-paced, quick read which engages the attention and doesn’t let it go.

I received my copy of this book courtesy of the public library. You can find THE EPIC CRUSH OF GENIE LO by F.C. Yee at an online e-tailer, or at a real life, independent bookstore near you!