“The Devotees work for the Department of Evolution – everyone just calls it Devo – and they do the work of Creation in partnership with God. The Department of Evolution is under the direction of Secretary Galton. Basically, she’s God’s voice here on Earth. In the midst of the genetic revolution a hundred year ago, when the Genetic Integrity Act closed America’s borders, strict protocols for border biosecurity were instituted to stop genetic contamination. But we were still in danger of being overrun by the Deviants on the other side. Galton took control, ordered the fortification of our borders, and gave the military the authority to do what they needed to do.”

The military did what they had to do, all right – they closed the borders, and made sure that they stayedclosed so that the Devos could begin the work of Regenesis: removing unwanted traits and improving and enhancing one’s best traits, under the the guidance of God. Physical perfection, mental cleanliness – the highest level of humanity that a being can achieve. Those in Regenesis are as perfect as God – and the Devos – can make them.

If this premise sounds a little familiar – a typical teen dystopia, in the style of THE MAZE RUNNER by James Dasher or DIVERGENT & CO. by Veronica Roth, or even INCARCERON by Catherine Fisher, you’re right – and you’re wrong. While this does have a familiar feel, there’s one big difference: this isn’t a game. There’s no ploy, no play, and no silver lining. This is life with religious totalitarianism, which for me is just a whole lot scarier than a lot of other post-apocalyptic/dystopia teen novel themes. The military aspect of the novel remind me of BLACK HOLE SUN, by David McInnis Gills, and PARTIALS, by Dan Wells, but reads most to me like Karen Sandler’s TANKBORN series, and INHUMAN, by Kat Falls. There’s a bit of the familiar, and a bit of the way-out-there.

Concerning Character: Jess has lived with the idea that genetics are everything, her whole life. There are CCTV cameras everywhere, and biometric data is constantly being collected on everyone, to be scanned and evaluated for signs of deviance, which tends to pop up in adolescence. Jess is careful – being Deviant is something that will make the Guardians have to shoot you, or administer a lethal injection as a Traitor to Humanity. She’s seen it happen just on the street, or people coming to take her neighbors away. It’s important to blend in, keep your head down, and do your best not to be Too Different, especially when you’re a teen.

However perfected humanity is becoming, one thing remains the same: the need for love. Jess really just wants to be with someone who loves her. That someone is her best friend, Jay, who has wanted to be a pilot for as long as they’ve both wanted to kiss their first boy. His dream has defined him, just as Jess’ understanding that her mother believes she’s Deviant has defined her. It’s a super long shot for Jess to think she can qualify for Special Forces, but she figures she could be in intelligence – I mean, she’s good with the computer, amazing at zipping through encryption and that kind of thing. She’s not so sure about defending her country, but at least she can defend herself – against her mother, who hasn’t ever really loved her, and against a too-absent father, and a too-gray world. Nobody bothers the Guardians, and NOBODY looks tangles with Special Forces. Not the Deviants, and not the holier-than-thou, suspicious Devos. 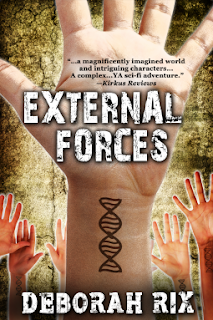 It’s a tiny surprise when Jess qualifies for the military. She’s stubborn, though, and she’s worked super hard, and this is her dream now. Of course she got in. It’s a blind shock when she manages to get into — not Intelligence, but Black Ops. Um, what??? Even Jay is astounded. And yet, it’s obviously a fluke: she’s horrible at shooting, crap at hand-to-hand defense, unable to sneak, and totally not a professional soldier, not like Jay. And, Jess is completely positive she could NEVER kill anyone, ever. And yet, she’s clearly being helped to pass the tests and checks to get her in… for some reason. Is it the hottie who is in charge of the Black Ops group, who is suddenly everywhere she is?? Is it the girl who’s suddenly Jess’ best friend? What’s going on?

If there’s a way to hide in plain sight, Jess has got to find it – fast. Or, everything she’s ever feared is going to happen – for real. Deviance – physical imperfection – mental imbalance – is not tolerated.

WARNING: You only thought you were over dystopian literature. You are not. Do not read while operating heavy machinery. The idea of a female “voice of God on Earth” is somehow freakier than having a male one… maybe because the male one thus far does not have a lab coat. You may only pick one minor god, religion or science. If you pick both, you end up with the hydra-headed Devos. Devos are scary. If you should notice a DNA structure showing up on your back, you may have a problem. Offer void where prohibited. Red hand prints are, in this novel, a political statement, and not the result of finger paint. Reading this book may cause an inescapable increase in heart rate. Your mileage may vary.

This book came to me courtesy of the author, and the Independent Book Publishers Association. You can find EXTERNAL FORCES by Deborah Rix online, or at an independent bookstore near you!