As a panelist for Cybils YA Speculative Fiction, Round 1, I’m going to be briefly writing up some of the hundreds of books I read as part of the award. As panelist conclusions are not for public consumption, the purpose of these write-ups is to keep track of what I’m reading, and will mostly touch on plot synopsis, with minimal comments on thematic tropes.

Synopsis: Miles is a Brooklyn Boy who attends the prestigious – and aggravatingly rich boy – Brooklyn Visions Academy, on scholarship. When he’s back in his neighborhood, he’s just a guy – yawning through early Mass with his mother, rolling his eyes at his Dad while taking out the trash, and cracking wise while playing video games with his best friend Ganke. He’s also, through all of that, trying to listen to his spidey-senses… which lately have been acting a bit weird. Spider-Man duties don’t quit, even while Miles is at school, so when Miles is suspended for abruptly leaving class one time too many – with no explanation to his least favorite teacher, Mr. Chamberlain, his parents are through, especially his dad. Miles is pretty certain it’s time to give up the Spider-Man gig, because Spider-Man or not, it’s Miles’ mother’s worst fear that he’ll turn out to be a hood like his Uncle Aaron, his Dad’s brother. And Miles’ father is determined that no son of his turn out to be thieving hustlers like he and his brother were. The neighborhood is Miles’ responsibility, his father pounds into him over and over – but to Miles it feels like he’s been charged and condemned to fix something that he never broke.

Maybe Miles isn’t meant to be good at saving the world. Maybe Miles’ best bet is to save himself – get out of his corner of Brooklyn, and make his parents proud. But, it’s hard to change overnight – there are clearly some evils still abroad, and one of them is Miles’ history teacher, Mr. Chamberlain. Miles cannot stay silent while his teacher essentially lies about the effects of slavery and the modern prison industrial complex. Mr. Chamberlain tries to make Miles feel bad about who he is – a young black man – and who he has the potential to be. And when Miles protests in class, Mr. Chamberlain lets Miles know that his scholarship can disappear just. like. that. 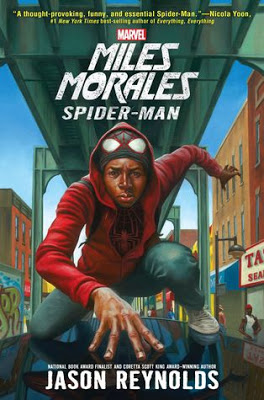 If this is what it means to be a superhero, Miles isn’t sure he wants to stay signed up.

Observations: Readers coming to these episodes in the life of Miles Morales may feel that they are missing something, and indeed, references are made to previous adventures. However, this book is well-written enough to stand alone without having read any of the comics, as I had not.

This book is less about superhero-ing and more about the realities of a regular life. It is against a backdrop of teen-and-parent tension that the superhero stuff is displayed. What may surprise readers the most is that Miles is not “good” in the single-dimensional comic book sense. He is himself – a normal teen, which means he makes good decisions and poor decisions, and he does normally stupid things. He has self-doubt and struggles, too.

We learn more about the specific pressures and privileges which shape a hopeful, successful, and genuine human being than we do about the Spider-Man canon, which for some superfans of the comic strip will be not as appealing, and especially those who disagree with Marvel’s decision to create a black Super-Man. However, the commonality of the challenges Miles faces are what makes him, in this setting, unique, and are what I feel will bring more readers to this superhero world.

Conclusion: Miles embraces his Puerto Rican and African American heritage, tries to be the type of man worth knowing, and cooks bad ramen dinners. He also crawls up walls and finds a way to overcome the racist antipathy of a teacher, taking superhero-ing into a new and different direction. His story reminds every reader that they have within them the ordinary-guy chops to be a superhero, too.

I received my copy of this book courtesy of the public library. You can find MILES MORALES, SPIDER-MAN by Jason Reynolds at an online e-tailer, or at a real life, independent bookstore near you!