Not gonna lie, when I was a kid, I wanted to be Jewish. At nine years old, my best friend was a twenty-three year old neighborhood yenta-in-training, and I dogged her steps. Raised a vegetarian, I nevertheless craved – and my friend provided – matzo ball soup, and I became a lifelong fan.

And then, there were the books I read and reread – the All of a Kind Family books, by Sydney Taylor, A Tree Grows In Brooklyn, by Betty Smith – my identity crisis led me, apparently, to desire umpteen siblings and a life of post-war poverty in early 20th century New York. At the time, it made perfect sense.

And, now I’ve read a book which makes me wish again that I were Jewish, if only so I could have a Rabbi Aron….

Concerning Character: Tara Feinstein has a lot going on. It’s nearly time for her Bat Mitzvah, which she may, or may not go through with. After all, Bat Mitzvahs are for Jewish girls – and the self-righteous snob, Sheila Rosenberg has already said once that Tara’s not really a Jew… because her South Asian mother isn’t really a Jew, despite the fact that she, hello, converted. Tara’s best girlfriend, Rebecca, seems largely unconcerned with the whole thing – sure of her place in the world, even certain that someday, she’s marry a Jew. Marriage!? They’re in the seventh grade? Tara is less sure of everything than everyone, it seems, and especially less than sure about the whole Bat Mitzvah thing because she’s — shhh! — not even really all that sure she believes in God. Tara’s best boy friend, Ben O., is decidedly Catholic, and preparing for his confirmation figures that probably, if you don’t believe in God, you’re going to hell… except, the Jews don’t really have hell.

And, then, there’s the other stuff that’s going on. Seventh grade, so far, is …different. Over the summer, some people got …figures. Ben O. is acting… really weird, as in, fake seventh-inning-stretch-arm-around-her weird. He’s making Tara nervous. And so is another boy in her class, and suddenly, this girl Jenna’s involved, and why does everybody think that Ryan likes her??? Tara’s flipping out over the whole boy/girl thing. What is wrong with everybody? And how is it that Rebecca could suddenly have lost her mind and become besties with Sheila Awful Rosenberg? Now, Tara is a third wheel in her best girl friend friendship… and out of luck entirely with her best boy friend. Is it any wonder she’s getting into fights?

And, on top of everything? Tara still has to work on her Torah portion, and her speech, and the clock is ticking. Don’t even ask what else could go wrong.

By turns both wise old soul and catastrophically clueless newbie, Tara’s wry take on her very Jewish grandmother – with her preference for the “classy, brown people” of the Sephardim — her controlling, worrywart mother – forever bickering with Meena Auntie, her pothead cousin, Vijay, her quirky peacemaker father, and her wise and frustratingly answer-a-question-with-a-question Rabbi Aron – together create an utterly charming, comforting, satisfying tapestry of a book which concludes with the best Bat Mitzvah speech, ever. I laughed out loud – frequently – and read passages aloud to the people around me, and we all agree: we want a Rabbi Aron, and a desi mispacha – a mixed up South Asian Jewish family, too. 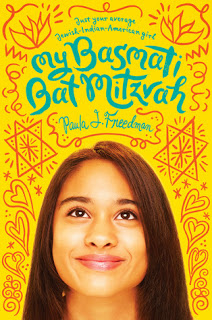 And the award for Character Most Adored Goes To…: Rabbi Aron. Younger readers may not necessarily agree, but every adult and teacher who reads this book and passes it along will. Why? Because Rabbi Aron takes seriously his charge of preparing his Hebrew school students for their Bat and Bar Mitzvahs. At a crucial point he says to Tara, “Find comfort in your doubts. Only the weak are absolutely sure of everything.” This is both disturbing and comforting, confusing and freeing, and I loved the process of Tara working through her beliefs – her hopes – and owning them. While some adults may wonder why the family is portrayed as non-observant, yet send their daughter to Hebrew School… may I answer that with “because?!” People do that sort of thing all the time, to give their child options, and it helps the reader be able to see Tara grapple with things on her own, without the soft certainties of “Mom and Dad and the Torah says so.” I wanted to crawl into the book and move in. Seriously, what do I need to do to get my own Rabbi Aron? A girl needs to know.

WARNING: This book embraces philosophy and dialectics, has a super-groovy Rabbi, and makes me long intensely for mango powder, samosas, a bowl of matzo ball soup, and my own Bat Mitzvah. The jacket flap mentions the charm of “Bend It Like Beckham” – not even. Try an updated Are You There, God, It’s Me, Margaret, that’s what I’m talking about. The Hindi-Hebrew-Yiddish-English glossary (with a soupcon of Punjabi) isn’t necessary, but it is hilarious. Polyglot seventh graders, coming soon to a world near you. The fact that the author felt it necessary to include “Billie Jean,” by Michael Jackson in the glossary bodes well. The scourge of the eighties is almost over. Do not read while operating heavy machinery. In stereo where available. Gotta love those reminiscent lotuses and Stars of David on the cover. Never mind that the model looks far too good-natured and sure of herself to ever get in a hair-pulling, shoving, screeching, word-sputtering fight, at least some of her ancestry shows in her face. Available from Amulet Books October 1, 2013.

I received my review copy courtesy the pubilsher, Amulet, via NetGalley. After October 1, 2013, you can find your copy of MY BASMATI BAT MITZVAH by Paula J. Freedman online, or at an independent bookstore near you!