Seeing a lineup of writers whose work I appreciate made it easy to pick this one up – in spite of the cover, and in spite of the title. “Shards and ashes?” I muttered to myself. Well, yes. The remnants of once great civilizations, once reasonably organized societies. All we have left, once everything goes ‘kablooey.’

The point of this short story collection is to put our heads and hearts to the question: will we have anything left, once we no longer have the “all” that makes up the world we know? Will there be left anything of worth?

If you’re a fan of the dystopia, then this is the book for you. Fast-paced, bittersweet, yet filled with a haunting effect that will last beyond the last page.

Reader Gut Reaction:It’s helpful, at times, to revisit the definition of dystopia: a fictional community or a society in which there is an undesirable element, or a combination of elements, producing a negative effect on this community or society. Wikipedia adds, “Dystopias are often characterized by dehumanization,[1] totalitarian governments, environmental disaster,[2] or other characteristics associated with a cataclysmic decline in society.” With this definition in mind, you might think that dystopia is always negative, in its darkness, but it is not. It is not “easy” reading, with readily seen, simply digested answers. There is beauty in the contrasts between light and darkness, and well-written dystopia has within it the power to transfix and compel, maybe not in as simple a fashion as a feel-good-unicorn-and-rainbows tale, but it has that ability just the same. 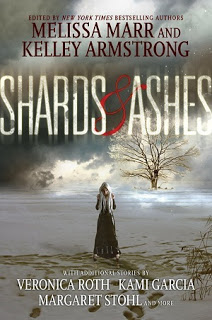 Concerning Character: My favorite stories in this collection are stories in which, in the face of the overwhelming dehumanization of a community, that people still matter. In HEARKEN, an alcoholic mother, dying of liver failure, reteaches her daughter about not only her history, but her future — in the beauty of her death-song, which only a Hearkener can hear. DOGSBODY tells the story of the coldness of the K Level Kids, and how, through an accounting oversight, there were once too many of them… and then, there weren’t. What can one K kid do, to level the playing field? Nancy Holder’s PALE RIDER mingles dystopia and fantasy to create a whole new place readers will desperately want to explore. Beth Revis’ addition is absolutely chilling, and Carrie Ryan’s is both breathtaking and heartbreaking. As I said, every story in this collection shows the bright and dark places in life, perhaps more sharply realized against the backdrop of dystopia.

Recommended for Fans Of…: the work of Veronica Roth, Melissa Marr, Margaret Stohl, Kelley Armstrong, Beth Revis, Kami Garcia, Nancy Holder, Rachel Caine, and Carrie Ryan… sensing a theme, here? These are, indeed, the authors who contributed to this anthology. If you’re a fan of anthologies like I am, there’s another, edited by these two powerhouse authors – ENTHRALLED: PARANORMAL DIVERSIONS.

Cover Chatter: Cover theme colors of sepia, gray, and white with a hint of red worked beautifully for the mostly post-apocalyptic worlds found within. Snow – or ashes – cover the ground, and an eerily twiggy tree lurks skeletally in the background of cloud-choked gray sky.

Frankly, I would have stopped the imagery right there. World ending, drifts of ash, freakish tree: done. Instead, there’s more… a white-haired girl in what appears to be a long leather dress and platform heels in the foreground… I have to admit, I don’t know who she’s meant to represent, or quite why she’s there. No one in the book is rocking a long leather dress – when the world ends, leather dresses are amazingly hard to come by for the average person. And, her hair just hanging long and white – not looking dirty or knotted? In her dystopia, daily baths and brushing are mandatory, I guess. Ah, well, the girl makes less sense, but she seems mostly there for effect. I love the doubling effect of the title font, the corrosion appearing on the letters – it all works, and brings to mind the Frost poem, “Some say the world will end in fire, Some say in ice…” Even with the girl, this cover works. Dystopiatastic.

I found this book at the library. You can find SHARDS & ASHES edited by Kelley Armstrong and Melissa Marr online, or at an independent bookstore near you!