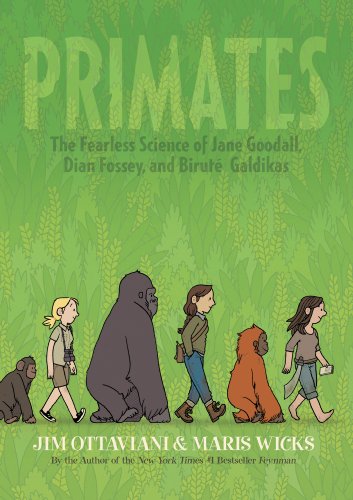 Reader Gut Reaction: We don’t really do nonfiction here at FW (not that we don’t read it; just that we don’t often review it) but I usually make exceptions for graphic novels. And when I was offered the opportunity to review the latest GN by Feynman author Jim Ottaviani—entitled Primates: The Fearless Science of Jane Goodall, Dian Fossey, and Birute Galdikas–I was thrilled at the prospect. A., ever since my first exposure as a kid to Cartoon History of the Universe I’ve really thought the comics format was a fantastic way to talk about science. B., there is NEVER a bad time to laud the accomplishments of women in science. And C., primates are cool.

This book was funny, endearing, and educational, and not only documents these primatologists’ major, well-known achievements but also shows us a few entertaining lesser-known facts about spending life in the jungle studying our hairier cousins. I really enjoyed the feeling of having a firsthand glimpse into the nitty-gritty of their professional (and personal) lives, and I learned a lot I hadn’t previously known about the formative years of each scientist—how they came to be pioneers in their field.

Concerning Character: The author notes that he took a few creative liberties in telling the three intertwined stories of these admirable and pioneering scientists. If that is true, then what he’s done is given the reader a relatable point of entry into the real deal, a way to get at the heart of the story; and the artist (unbelievably, a graphic novel newbie!) provides an all-important visual rendition of the remarkable things each of the women accomplished. And each of the scientists has a very distinct story, even though they share some commonalities (such as professional attachment to the famous Louis Leakey).

Visually, Goodall, Fossey and Galdikas are depicted so that they are easily distinguishable; furthermore, their voices are shown using different type styles, so that even when narration overlaps, we know who is “speaking.” Because we get to learn what attracted each one to primatology in the first place, it is easy to become immersed in each scientist’s story as they become more and more absorbed—we see what draws them to chimps, gorillas, and orangutans, what they learn, and the surprising things we primates have in common.

Themes & Things: What does it mean to be human, and what do we have in common with our primate cousins? Just one of the major takeaways of this book is that our kinship goes beyond surface similarities. Goodall discovers tool use in chimps, for instance, while Fossey makes a connection with gorillas that brings out our common sense of curiosity, and it’s moments like this that remind us that we’re still a part of the natural world.

Cover Chatter: JUST LOOK AT HOW CUTE THEY ARE! The scientists AND the primates, that is. I absolutely love the parading cast of characters on the front cover of the book, but what really brought a smile to my face was the back cover, with the same characters intrepidly vine-swinging diagonally across the page. As usual, First Second has some first-rate book design.

You can find Primates by Jim Ottaviani and Maris Wicks online, or at an independent bookstore near you, starting tomorrow!