FIRST, you should read John Scalzi’s hilarious chat with the author of this book, John Hornor Jacobs, and find out a little more about it. There’s his crusty old man, Grumps, there’s talk of Southern Gothic, there’s poetry, and a whole lot more.

To be honest, it’s kind of a hard book to review. Not because of the plot – the story’s rock solid – but because it’s hard to convey whose side we should be on. Do the bad guys really mean harm? Is the narrator – in juvie – at all trustworthy? Can you be sure of what you see? This is the first salvo in the INCARCERADO trilogy and is fast-paced, intense, and gritty. Without the lift the humor provides, this book could be seriously depressing – because it’s a lot about reality. To add a little balance to my gushing about this novel, I’ll say that some scenes near the middle could have been shortened – but there’s also this ambiguity for the reader about Shreve’s behavior near the around then, too. Who knows, maybe it’s perfect as it is! I can see this novel being well received by those not interested in the usual YA speculative fiction fare. It’s got a “buddy movie” blend of stupid behavior, bad language, and depressing realities – with a surprising bit of heart.

Reader Gut Reaction: Welcome to Casimir Pulaski Juvenile Detention Center. It’s here that residents learn the truth: “We’re born into pain, and we leave in pain, and we cause it along the way too, it seems.” There are varying levels of theft, graft, and ways of gaming the system – as there are anywhere. There are people you can trust – for a price – and there are people who can’t be bought at all. There are people who look like they have your best interests at heart – and they might. In spite of everything Casimir is a safe place – three square meals, a place to sleep, activities, the occasional piece of candy. It’s not that bad a place, if you absolutely have to stay. Unless it gets to the point where you absolutely cannot stay…

Concerning Character:Shreveport Cannon is fifteen and …screwed. His mother is a staggering drunk, his father… wait, what father? All he has is his Little Dude, and his girlfriend, whom he adores to pieces and bits. All that he cares for, he slams in the crapper by doing one stupid thing.

And isn’t that always the way it goes? 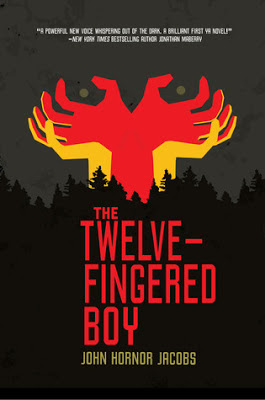 So, yeah. He’s in D, as my students used to call the state detention facilities, but it could be worse. He could be at The Farm, where his side business would never work out, where there’s nothing but work from dark to dark, and where he really does not want to go. So, he games the system, but he also makes a point of showing up clean, smiling big, and not rattling the cages of the staff too hard. Shreve’s got a gig worked out pretty well by the time new roomie shows up. Jack Graves is weedy, short, skinny. He looks like a bawling mama’s boy – or as Shreve calls it, a “titty-baby,” – and Shreve isn’t thrilled. Still, there’s something about him… he’s sure interesting to a lot of people. Shreve, who knows that the best currency is information, determines to find out all about Jack that he can.

Shreve’s even further squicked out when he sees Jack’s hands. FREAK ALERT! Twelve fingers? Jack’s hands are an embarrassment to him, humiliating, and infuriating. At Casimir, having something you care about that much is about as good as painting a target on your back.Though Jack asks Shreve not to tell, he knows the others will see them. Though Jack keeps his hands jammed in his pockets, it’s only a matter of time.

The thing about Casimir, though, is that it’s all about keeping your head down, being just like the other guys, not drawing too much attention. If you stick up like a nail, you’ll get hammered down, right? The big boys are there to humiliate the little boys, especially weirdos like Jack.

The thing about Jack, though, is that what happens to other people when he’s humiliated…

Shreve tries to help Jack keep control, but it’s his own big mouth that makes everything really hit the fan. Jack’s little …oddity brings Casimir to the attention of a terrifying man name Quincrux and his partner – a woman with way more teeth than is comfortable to look at, and dead, scary eyes. When Quincrux zeroes in on Shreve, well, pretty basically all hell breaks loose. Three square meals a day and safety are a thing of the past, as Shreve and Jack break out and go on the run. And with Quincrux in the mix, there’s nowhere to hide…

Recommended for Fans Of…: THE OUTSIDERS, by S.E. Hinton; HOLES, by Louis Sachar; THE INFECTS, Sean Boudin; THE KNIFE OF NEVER LETTING GO, by Patrick Ness; UNWHOLLY seriers, by Neal Shusterman, INCARCERON, by Catherine Fisher, and other “buddy movie” types of novels, with a bunch of guys, swindling people and saving the world. Kind of.

Cover Chatter: Taking a look at this book from the outside in, I can’t say that I love the cover – it’s striking, but there’s a certain horror movie aspect to the Great Massive Hands Of Doom erupting from the dark woods and hovering above the skyline… that never happened. On the other hand, red, black, and gray work well, and at least there’s no pink. For a book with an all-guy cast, that’s reasonably good.

FTC: No payment was advanced for this unsolicited review; NetGalley ARC received courtesy of Lerner Publishing.

After February 1, you can find THE TWELVE-FINGERED BOY by John Hornor Jacob online, or at an independent bookstore near you!