Reader Gut Reaction: Every sibling novel about sibs protecting each other has a special place in my heart. I loved that aspect to the story, and I loved that Becca was such a tough advocate, a la Catherine in Cynthia Lord’s RULES, but because of the vast difference in ages, without the embarrassment. The real path a family has to walk to help a child in need is brought to life in this work. That being said, there were a few spots in this novel I felt should have been gone into further; Becca has a real respect issue with her mother which is shunted away as merely being Becca’s problem with her father. It’s obviously a tough call where to spend time on “emo issues” in a genre novel, but I think a little more would have made Becca’s independent attitude and the relationship with both parents more believable. There were other spots where I saw the plot curveball coming well before it crossed the plate, but I remind myself that I’m not entirely the audience for the novel. I believe that overall it’s a strong start to what’s going to be an interesting series.

Concerning Character: Becca is seventeen, and already mostly an adult – she graduated with a 5.0 at fifteen and holds a waitress job until she feels more ready for college. She is mouthy and stubborn, and her intense hyperfocus is on forcing her mother to have some backbone. See, the problem is her brother Ryland hears voices. The school district has tried to help. Child protective services has tried to help. Ultimately, their “help” comes in the form of wanting to take Ryland away from his family. And every time, her mother has considered it. She only wants what’s best for him, of course, but Becca disagrees what the “best” might be. Ryland’s a good kid, for all that he’s only ten. He deserves to have fun, and not be afraid of the voices he hears. But when two men from St. Brigid’s in Ireland — one really hot, and one really not — want to “help” Ryland at their school, Becca sees red. Since when do special needs kids get scouted from the states to go to British schools? Since when does anyone but Ryland’s family know what will “help” him? And there’s one huge reason why these two guys can’t possibly have Ryland’s best good at heart: St. Brigid’s is their father’s school – and he’s the one who abandoned them to be Headmaster there when Ryland was barely two weeks old, and Becca was seven. Why on earth would her mother think it was a good idea to send Ryland to him? 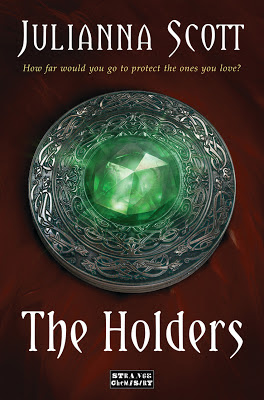 It helps that one of the guys is really attractive. Becca suspends much of her disbelief long enough to negotiate accompanying Ryland to Ireland – and there finds a world she couldn’t have dreamed existed – beautiful, historic buildings, really nice people, the strange history and society of a people called Holders… and her father. In spite of that, for the first time, Ryland is wildly, truly happy – and absolutely normal for ten, which means he’s too busy and involved to do more than wave to his sister in passing. When everything is going so well, who needs her?

In trying to figure out what to do with her life, Becca stumbles upon the truth that Ryland is important – more important than she could have ever guessed. But, he’s only ten. What kid can possibly be responsible for saving the world? And what kind of sister is Becca if she’s so busy trusting the hottie who brought them there that she doesn’t see the danger until it’s too late?

Recommended for Fans Of…: Sibling fiction, Only You Can Save Us (TM) fiction, and Fiction With Great Jewelry – including the Potter books, THE DRAKE CHRONICLES, by Alxyandra Harvey, DULL BOY, by Sara Cross, A Wrinkle in Time, and many more. An original premise that’s a twist on a whole bunch of classics.

Cover Chatter: That there is one large jewel. What’s hilarious is that there are big, ugly pieces of jewelry throughout the book – a ruby pinky ring, a chain-laden armband – and it’s the mark of an author who isn’t taking herself too seriously when she has a character call out the ugly jewels. (Nobody ever said The One Ring was gorgeous, they just all wanted to wear it.) The cover depicts a specific thing in the novel, and actually ties in — so, well done, cover design crew!

Authorial Asides: I was surprised to discover that this is a debut novel; however, the author has been writing forever.

FTC: This is an unsolicited review from a NetGalley ARC, furnished courtesy the author. No money exchanged hands; all opinions are my own.

After March 13, 2013, you can find THE HOLDERS by Julianna Scott at B&N, Amazon, Waterstones, WH Smith, or at an independent bookstore near you!