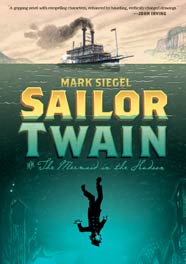 Reader Gut Reaction: This one is subtitled “The Mermaid in the Hudson,” and so if you gravitate towards stories about local legends and rarely-glimpsed semi-mythical creatures, then you’ll enjoy the premise: the time is the late 1800s, and a steamboat captain rescues a harpooned mermaid from the river. He can hardly believe it himself, but once one strange thing happens, then it all starts to get VERY weird for him, and soon, the fact that he’s hiding a mermaid in his quarters becomes just one of his troubles.

For one thing, his friend Lafayette, the owner of the ship, is almost compulsively womanizing, as if his life depends on it, while at the same time he’s developed an obsession with the works of C.G. Beaverton, a secretive author who writes about…of course…local legends. Could Beaverton’s newest work, Secrets and Mysteries of the Hudson, hold answers for both Lafayette and Captain Twain?

Secrets AND mysteries abound in this graphic novel, which combines a simplified cartoony character style with a more detailed and atmospheric drawing style for the backgrounds. I enjoyed the texture of the pencil drawings, which lent a very expressive and moody feel to the story. It was fitting, particularly with respect to the ever-more-mysterious doings on board Twain’s ship, and the rather enigmatic ending (which we had an interesting discussion about over at Guys Lit Wire—I highly recommend reading the review and the comments).

Concerning Character: Siegel really succeeds in conveying the secretive nature of Twain, the main character—he expresses a lot of Twain’s reactions through nonverbal, visual means, combined with some minimal narration between panels, and he doesn’t rely on the thought bubble to tell us what Twain thinks. However, that’s a difficult balance to strike without revealing too much; at times, I felt like the story erred in the opposite direction, and I felt a little lost. Nevertheless, Twain is a fleshed-out character with a tragic backstory of his own, and so is Lafayette the Carousing Frenchman—despite the fact that the two couldn’t be more different on the surface, it’s what they DO have in common that is the key to the story.

Recommended for Fans Of…: Stories about local lore, like Gwenda Bond’s Blackwood or Guardian of the Dead by Karen Healey (reviewed here), or older YA/crossover graphic novels where weird and fantastical things happen to supposedly normal people, like Anya’s Ghost (reviewed here) or Level Up (reviewed here). Note for parents: As you would expect, mermaids…ahem…do not wear tops.

Themes & Things: Thematically, this book deals in a very evocative way with the idea of PLACE—of myths that can’t be separated from their setting, of the past and present intertwining because of the magic of a specific locale. The story also deals with what love truly means, as opposed to mere lust, or obsession, or sympathy, and the trouble that ensues when the lines between love and…other things…begin to blur.

You can find Sailor Twain by Mark Siegel online, or at an independent bookstore near you!