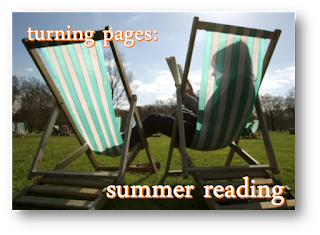 M.T. Anderson is the king of the intellectual young adult novel. His work is arguably not written for young adults, but rather simply marketed toward them, because his characters are teens and tweens whose behavior is not circumscribed by the “usual” teen boundaries which get books challenged and called out by concerned parents. A lot of times, teens might not truly even quite understand M.T. Anderson’s novels… but there’s definitely still something about them that makes them fascinating, worth rereading, arguing with friends about, and dissecting in English class. This novel is just about how fragile our society is, and how, if one leeetle domino was pushed, how quickly it would all fall apart, and what do we REALLY know, and what do we REALLY cherish and what REALLY has value in what we have now — today? And that kind of observation and rumination is very intelligent – and something we all need to consider.

This is another classically Anderson book – a short, stabby little satire, with a dark futures, existentialist narrative that might upset some – but which will amuse and provoke others to further consideration and insight.

Synopsis: Adam Costello’s carefully ordered world began to unravel when the vuvv landed on Earth. Not that the vuvv are killers or anything, no. They’ve just brought progress – all at once, igniting a new kind of class war. Now, there’s no need to work, because the vuvv do all the jobs; no need to research and strive, becaue the vuvv have brought the cure of all illnesses. At the expense of human jobs, Earth’s ecology, and myriad nations’ sovereignties, the Earth has been made a client planet. Now there’s no competition, because the vuvv have the least expensive everything. Farmers are undersold, goods are commercially produced elsewhere, and all the new tech and medicine is behind a steadily rising paywall. For those who made relationships with the vuvv early on, there are riches untold. For the “have nots,” there’s nothing, literally and truly nothing. People are bored, bitter, and starving. All that seems left is for humans to try and be and do what the vuvv see and enjoy – the 1950’s in terms of art, music, and film. Entertaining the uber-rich and the vuvv, humanity scrambles to be funny, romantic, sexy, and pleasing. It is both lowering and amusing that adult humans, with advanced degrees, can think of nothing else to do to survive but to pander. 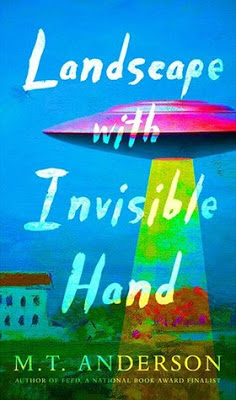 Adam doesn’t fit into the new world order really well. This is not because he has not tried, and tried hard, with an entertainment vlog scheme hatched up by he and his lust neighbor, Chloe. For a while, they made decent money off their scheme. But lust doesn’t last for long. Adam’s crush wants to Be Somebody, and Adam, whose father has stolen their means of travel and disappeared into the night, is kind of a nobody. His mother is unemployed, his baby sister is grimly selling her stuffed animals, and Adam is desperately ill, from a gastrointestinal disease which he got from the unfiltered water that his family is forced to drink. With municipal utilities no longer under the control of anyone with a human digestive system, Adam is hardly anyone to inspire lust – especially not without health insurance or medication. Between bouts of horrible fevers, diarrhea, and flatulence, Adam tries to determine what is of value to the human world anymore, now that the vuvv determine value. What Adam really cares about is his art, and while he once made computer landscapes of fantastical beauty as the places to which he’d like to escape, now he processes all he sees and feels through the medium of paint. He paints what he sees – not a brave new world, or castles in the air, but the detritus of a dying civilization, and the oddly tacked on ephemera of the vuvv society. What the vuvv want to see in art are still life and kitsch, bright colors and castles in the sky. While most people will do anything to survive in this brave new world, the artist in Adam realizes that he can’t give them what they want, and that, in a larger parallel, that maybe none of humanity can give the vuvv what they want.

Maybe it would be better if everyone stopped trying.

Observations: This novella-length satire is, in some part, about art and humanity. It is also about, in part, the way the United States relates to the rest of the world, and its colonialist attitudes. This is a novel about how everything is monetized, and only those who are workers or somehow “valuable” to what Important People need and want – entertainers, worker bees, soldier drones – are worth anything in Western society. This is also a book about family, and individuals, and what we do to survive. It is both sparsely written and terse, and voluminously artistically rendered. It is both bleak and grim, and sneakily, snarkily funny.
I noticed that there really was only one America in this novel, and that Adam didn’t seem to know anything about how the vuvv interacted with anywhere which wasn’t America. The were issues where people complained that immigrants were stealing jobs, and knocking apart bodegas, but the vuvv seem to see humanity as just… humanity, a group of cattle worth corralling. Ironic, that humans still blamed humans for what was going on, and yet… isn’t that what we do? Isn’t that what we always will do? Or, do we have it in us to try something else?

Conclusion: Adam and his frequent, explosive gastrointestinal disorder is going to gross out and confuse a lot of readers, young and old, but this is one of those short pieces of literature which we’ll see later as a classic of economic thought and worth sticking with and returning to again. While it would be a challenge to teach, it would be a worthwhile challenge, and I look forward to hearing how it is received.

I received my copy of this book courtesy of the publisher. After September 12th, you can find LANDSCAPE WITH INVISIBLE HAND by M.T. Anderson at an online e-tailer, or at a real life, independent bookstore near you!