Last week was just a wee bit…CRAZED for us here at FW, with Tanita and I both plenty busy in the offline world, so we may have missed mentioning that Code Name Verity by our blog bud (and Tanita’s actual, real-life writer friend) Elizabeth Wein is available as of May 15th! Congratulations and hooray!

Now, Tanita has already written a most capable and in-depth review of Code Name Verity back when the UK version came out, so I’m only going to write up a quick one here, now that I’ve had the privilege of reading it via NetGalley. 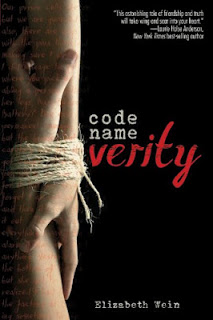 I’ll preface my notes by saying that historical fiction is not for everyone. We’ve discussed this very topic in the recent past, in fact. Code Name Verity is the type of historical fiction that rewards those who want to not only read about the past but LIVE it in vivid and authentic detail. It is obviously incredibly well-researched, and though the level of detail may not be right for every reader, it left me with no doubts about the characters, their roles, and their presence within the story.

As the cover nicely implies, this is the story of a bond between two young women, an indelible one, one that outlives everything that one could ever think of to test it. Both women have roles in the British military during World War II, if very different ones: the one nicknamed Queenie is proudly Scottish but fluent in German, a skill which serves her well, while Maddie is Manchester-born, a pilot in the Air Transport Auxiliary. We ultimately are allowed into each character’s viewpoint, starting with (VERY MINOR SPOILERS) Queenie, who, we quickly find out, has fallen into the clutches of the SS in France and is frantically spilling her guts and her secrets on paper, writing for her very life, knowing she could be forever branded a traitor. Maddie’s side of the story is very different, the story of a daring pilot whose worst fears include being shot at and letting someone down. What shines through in both stories, though, is the friendship and love that grows between Maddie and Queenie, who make an unlikely but undeniably effective team both in the air and on the ground.

This story has tension and relief, secrets and lies, friendship and betrayal, but it constantly keeps the reader guessing as to which are which. I don’t want to give too much away, so I’ll leave it at that, but I will say that once I began asking questions about the story and characters in my own mind, I found this book very hard to put down until I found out the true answers. Is Queenie the traitor she seems to think she is? Is Maddie the coward she fears she might be? And will their friendship weather the test of war and its unthinkable horrors?

You can find Code Name Verity by Elizabeth Wein at an independent bookstore near you!

Here’s a bit of a bonus link for you: in Tanita’s post about Code Name Verity, she mentioned that the book passes the Bechdel Test. Well, the fabulous Ms. Alison Bechdel for whom the test is named has a recent interview posted on GraphicNovelReporter about her latest book, Are You My Mother?. All I can say is, I loved Fun Home and look forward to reading this one, too.