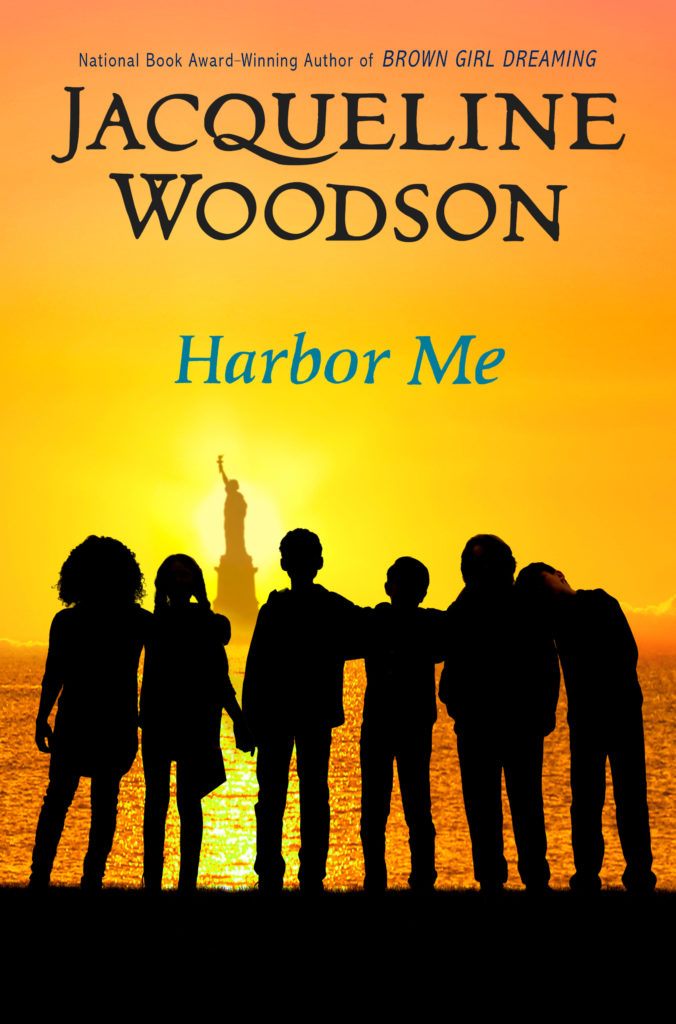 I think, looking back on that day now, that’s the line that will always stay with me – another room, by ourselves. How many other rooms by ourselves have we walked into since that day – even if they weren’t real rooms and we didn’t know that’s what we were doing?

– from HARBOR ME, by Jacqueline Woodson

This is a hard book to explain, but up front I want to say that it is beautifully written, evocative of the echo of a sound that you’ve just heard and want to hear again, but aren’t sure what it was.

Ashton, Holly, Esteban, Tiago, Amari, and Haley are struggling sixth graders who, in an experimental move, are separated from their classmates and introduced to a slower pace — and an hour long chat session at the end of the week. Dealing with more than the usual stressors, and belonging to a well-funded public school, they are privileged in having a teacher who has the bandwidth to truly see them – and to help them see each other.

As they get to know each other within the confines of the ARTT room – the old art room which is now repurposed and re-acronymed into “A Room To Talk” – the concerns and fears which weigh their days take shape. Esteban’s father is a detainee in Florida. Amari is stunned and dizzied by the new requirements of being a young black man – not a child anymore. Holly struggles with all that she has – a nice home, two parents buying her what she wants, and an inability to sit still and say what she means. Tiago watches his mother shrink as “Speak English! You’re in America!” is hurled like barbs into her Puerto Rican heart. Ashton is confronted by his whiteness, as a first-time minority in a very brown school being bullied for it. Haley is terrified of losing what she hardly remembers – the echoes of a loving mother – and gaining what she doesn’t remember – a father who lives with her at home.

Over the course of one school year, how much does talking fix? How much difference does someone knowing their particular truths make to the things going on in their lives? In a way, there’s no difference at all. And, in another way, it means everything.

I read something beautiful in this novel… a meditation and a reflection on the bridges we create when we put our hands into the hands of others and accept our commonalities… but I also confess I cried through most of it. Short and poignant, this was a heavy, heavy book for me, read on a particular day when one more “stranger within our gates” had died in immigration confinement. I don’t know if I would have seen anything but sadness, reading it as a kid in a time like this… I would have had to read it again and again, and sit with it, and really wrestle with what it means to want to just grow up and be free to do what you want, but to confront these realities about our country and who is truly free – and who is not.